This one does have some things in common with THE WRESTLER. Both are smartly written, observant, bleak dramas about working class dudes in sports subcultures that don’t usually get much respect. The premise sounds like a comedy: an obsessive sports fan has to decide what to do after getting beaten up by his favorite player. I can imagine the Adam Sandler or Rob Schneider vehicle they could make out of that, but this is more of a drama with some squirmy, uncomfortable chuckles here and there, kind of a minimalistic TAXI DRIVER type character portrait. And for those of us who have written extensively about aikido masters it brings to mind some disturbing hypothetical scenarios. 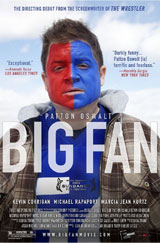 The big fan of the title is Paul, played by Patton Oswalt of BLADE PART 3 and WRONG TURN 2 fame. He lives in a small Staten Island apartment with his mother and works in a parking garage, but he has some passion left over and he aims it entirely in the direction of the New York Giants. Sitting in that little booth at work he listens to sports radio and writes what he’s gonna call in and say when he gets home. He has a bitter rivalry with another one of the regular callers, an asshole Eagles fan.

There’s a quick joke where Paul’s little white nephew gets a birthday cake with a 50 Cent album cover airbrushed into the frosting. It seems like a funny throwaway joke at the time, but thinking over the movie afterwards I realized it’s kind of the same as Paul’s worship of his favorite player, Quantrell Bishop (Jonathan Hamm). There’s an interesting theme going here that he idolizes and is desperate to meet this guy he doesn’t have a single thing in common with. He’s this short, poor white guy who analyzes sports to death, his hero is a superstar athlete with an entourage who loves to flaunt his money at strip clubs on the other side of town. Paul eats too much junk food, Quantrell is seen making a drug buy. I just figure if Paul tried to talk to Quantrell about football statistics it wouldn’t go over well.

The movie never mentions race at all, but I think that 50 Cent cake makes it a major theme. 50 Cent’s album cover on the nephew’s cake and Quantrell’s poster on Paul’s wall have the same basic idea: a muscular, glistening black warrior exaggerated into a force of nature. I think Quantrell’s had lightning bolts around him, 50’s has a bullet hole through glass aimed right at him, but no wound, like it bounced off his steroid-pumped six pack or his blinged out crucifix. And Paul even dreams of Quantrell in the operatic style of a Nike commercial, closeups showing the bright lights of the football field glimmering on his long dreads as he prepares for battle.

I’m not making a judgment here, just an observation that our culture likes to commodify black men like that, at least a stereotype of their physicality in the worlds of rap and sports. And it works. Despite the tortured history of race relations in this country I think most of us white dudes are convinced that black dudes in general are cooler than us. That sounds terrible, it’s one of those condescendingly positive stereotypes like “Asians are good at math.” But we tend to believe it, so it makes it easy to market fictional characters like the 50 Cent of that album cover and the Quantrell Bishop of this movie to us in ways that make us worship them like super heroes. I’m sure there are different ways to look at how good or bad that is or what it says about our culture, but I just think it’s cool that the movie noticed it. Good observation, BIG FAN.

The movie pulls maximum uncomfortable suspense out of Paul and his friend (Kevin Corrigan) watching Quantrell in a strip club and trying to figure out how to meet him. When they finally decide to just walk up and introduce themselves it seems ridiculous, scary. Why is this guy gonna wanna talk to you? He’s QB, you live with your mom!

But it almost works. Maybe I made too much out of those differences. Somebody told me they had a friend, young nerdy white dude, who saw Suge Knight in a restaurant and got him to pose for a picture. People can be nice even when you don’t expect them to. Maybe it’s fine. Paul just shouldn’t have let slip that he’d been following them all night.

After he gets beat up he starts to see editorials calling Quantrell and other athletes “thugs.” And that’s another parallel with rappers. The same media that turns a guy like 50 Cent or Quantrell into a sensation, promotes their backstories (he used to sell crack, now he owns part of VitaminWater! He got shot 9 times!), makes them seem like these exciting, dangerous characters… it then turns around and gets angry at them for following through with it. “He’s the bad boy of football! But why did he have to do bad stuff?”

I’ve read and heard some negative comments about the movie thinking it meant to judge Paul and sports fans in general. Maybe it helps that I’d heard an interview with Siegel and knew that he grew up listening to sports radio and that he likes and relates to this character, but I definitely see it as a sympathetic portrait. You aren’t supposed to laugh at him when he’s on the air and his mom picks up the phone and starts telling him how late it is, you’re supposed to feel horrible for him. He’s not exactly the poster boy for mental health, but he’s not Travis Bickle either.

Just because the movie doesn’t turn Paul into an adorable manchild like it would in the Adam Sandler version doesn’t mean it hates him. I think it’s standing up for Paul. I think it’s sincerely defending his right to live life the way he wants to, even if other people think he’s a loser. His family harasses him about being “successful” like his brother, but he sees his brother’s sleazy lawyer job and his wife with the fake boobs and he’s not interested. He doesn’t see why his shitty job is such a bad thing if it allows him to do what he wants to do at night. He’s not a hero, obviously. He doesn’t have alot of ambition. I wouldn’t really want to hang out with him. But he knows what makes him happy, at least, and it’s not money. Give him credit for that.

When Paul wakes up from a 3 day coma after the beating the first thing he does is ask about the game he wasn’t conscious for and then realizes in horror that he caused Quantrell to be suspended. He doesn’t cooperate with the authorities in order to protect his team. I don’t think he really believes his defense of Quantrell, “I was bothering him,” but he doesn’t want to fuck up the season. It’s a funny idea, but in a weird way it’s admirable. This is not a rich guy. He could use some money, and the guy really did beat the shit out of him, it’s not asking alot for him to pay up. But Paul does the unthinkable – he accepts his beating and doesn’t try to get money out of it. That’s the crazy thing he does, he lets bygones be bygones.

I think the movie admires Paul’s integrity in choosing his love of sports over his opportunity to profit. And the irony is that he ends up committing a much less serious assault than Quantrell but gets far more punishment, because his victim is the opposite of him, a guy who you know is gonna squeeze every drop out of the situation that he can.

Oswalt is really good in it too. If you know him as a comedian you can imagine he’s good with the radio call-ins and what not. But he pulls off alot more than that. At one point he has his face painted up in a Philadelphia sports bar, pretending to cheer on the Eagles. You don’t know what he’s going to do, and he’s actually scary. The guy from RATATOUILLE scared me a little.

It’s a modest little movie with fairly crude filmatism, but the more I’ve thought about it in the couple days since I watched it the more I see in it. Seems like this Siegel dude knows what he’s doing.

Kevin Corrigan Michael Rapaport Patton Oswalt Robert Siegel
This entry was posted on Thursday, November 26th, 2009 at 2:42 am and is filed under Drama, Reviews. You can follow any responses to this entry through the RSS 2.0 feed. You can skip to the end and leave a response. Pinging is currently not allowed.