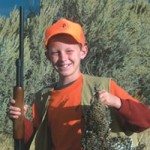 Well, it turns out alot of things could, but that’s not a complaint. Maybe it wasn’t the gritty action thriller I pictured when I saw the cover, but I still really enjoyed this goofy movie. It starts out real promising with a bounty hunter named “Papa” Thorsen (Steve) driving a big ass boat of a car into a neighborhood, having a hell of a time parallel parking it, right in front of a crowd of people. Bumping a Cadillac right in front of the owner. Then he goes inside a bar and picks up young Levar Burton, who is wanted for some petty crime. He brings the kid in, gives him some tips for dealing with the judge, and goes home.

Somewhere around here, we realize that the movie is not necessarily gonna be balls to the wall asskicking. I mean he picked up Levar without a struggle. And then they have a long conversation! It is starting to seem that motherfuckers will not get their arms broken in this movie, at least not very often. There will not be any eyeballs poked out or even some dude tossed through a window. It is looking pretty dicey at this point. See, “Papa” has this eccentric type lifestyle where he goes home to his big house, and there’s like 25 people there hanging out and playing cards, some of them don’t even know who he is and he owns the damn place. Pretty soon even Levar Burton is gonna get out of jail and he’s gonna start hanging out there too, likes it’s a god damn dorm.

Papa’s pregnant girlfriend is there and he brings her an antique Buck Rogers toy. Turns out he’s one of these dudes who likes everything old and hates everything new, which is why he drives that big car. For a minute it seems like this is gonna be some wacky PG rated comedy like Fun With Dick and Jane or something.

But don’t worry – remember the theory of badass juxtaposition. It just happens that the juxtaposed element outweighs the badass element in this particular case. But no matter what you say about his personal lifestyle choices, the dude is still a bounty hunter so after some wackiness he goes to hunt some bounty. He mostly works for parents who made the mistake of putting up the bail for their punkass kids. For example some poor couple is gonna lose their restaraunt if their dumbass kid doesn’t show some respect for his elders and turn himself in. In one case Papa goes to the sherriff and asks for custody of a prisoner, but the sherriff won’t give it because the guy is his nephew. So Papa goes and knocks the dude out with a beanbag, throws him in the car and forces him to call his uncle and apologize.

We find out that Papa is getting old, having a tougher time doing his job, and also worried about being a real papa. He resists going to Lamoz class with his girlfriend, and seems to want to throw himself into his work to avoid real life. But at work he keeps running into some bullshit like having to drive a Trans-Am, which pisses him off. Or having to steal a tractor to chase some dude. Plus, Tracy Walter is stalking him, keeps calling him telling him he’s gonna kill him. Nobody knows what a bounty hunter feels.

The directionist is nobody special, just some dude, Buzz Kulik. He directed Bad Ronald and Brian’s Song and some other TV crap. But he did pretty good here. It was Steve McQueen’s last movie, released the same year he died (1980). And it’s not a bad last role, getting to do action and comedy and family man and Clint Eastwood style aging vulnerability all in one entertaining package. Maybe it’s kind of a silly mixed bag for a while but you know the movie’s a keeper when Papa chases a dude onto an elevated train and the guy starts shooting and takes a hostage. It reminded me of the subway chase I saw recently in Spider-Man Part 2 but this one is done without computers and strings and fancy fake shit. Papa has to climb onto the top of the train to escape the bullets, one thing leads to another and next thing you know he’s hanging from a pole extended off the roof of the train. And just like the famous motorcycle jump in The Great Escape I’m sure this is a stuntman and not Steve McQueen, but it doesn’t matter because you can clearly see that some poor sap really did the stunt, hanging off the pole, kicking his feet around. And you’re looking straight down onto him and you see that there are no nets below him, just cement and cars driving and people walking around. I mean it’s too bad, I love people flying around on ropes and pretending to do fancy matrixy shit as much as the next guy, but it’s just not the same as the simple thrill of some dude actually risking his life to give us the cheap thrill of pretending Steve McQueen is hanging off a moving train.

Well eventually Papa chases the guy off the train. The guy steals a car so Papa steals a tow truck and they have a high speed chase through a parking garage until the chump drives his stolen car off the garage and plummets to his death. (No word on whether that means mom and dad get to keep their restaraunt.)

What a fuckin day, right? So Papa takes a cab home and he’s exhausted. But before he gets to even kick one, let alone both, of his feet up he discovers Levar Burton beaten to a bloody pulp on the kitchen floor. (story of my life) Turns out his girlfriend has been kidnapped by Tracy Walter. So poor Papa has to run to the school for a shootout/fiery explosion and save his girlfriend. But wouldn’t you fuckin know it? The VERY SECOND that gets wrapped up, he realizes his girlfriend is going into labor and he has to drive her at Mach 5 to the hospital.

So basically, the last 30-40 minutes of this thing the guy can’t even catch his breathe. After you watch this movie you will feel like an asshole complaining about having a long day at work.

Buzz Kulik Eli Wallach Steve McQueen
This entry was posted on Sunday, August 1st, 2004 at 5:14 pm and is filed under Action, Reviews. You can follow any responses to this entry through the RSS 2.0 feed. You can leave a response, or trackback from your own site.