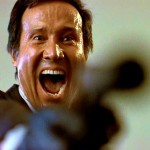 but not the John Woo one though
this one is 1972, aka L’INSOLENT

Sometimes in a man’s life a man finds an oversized vhs box with a weird painting of Henry Silva jumping out at him holding a gun. If you’re not familiar with Mr. Silva, he is the scary mafia don in GHOST DOG, the scary crooked CIA guy in Seagal’s ABOVE THE LAW, etc. He’s one of those guys, if he shows up in a movie, you know he’s a fuckin bad guy. Because you have eyes. That’s all you need to figure this guy out.

So I was surprised to find out that when he was younger he didn’t look quite as scary. I mean sure, he looks like a bad guy, but that whole thing improved with age. In this one he almost looks like Chevy Chase, if his head grew bigger literally instead of figuratively. Or maybe he is like the evil android of Wayne Newton. I don’t know. Still, he’s a cold motherfucker and from beginning to end he doesn’t have a kind thought or a moment of hesitation. He’s got his eye on the prize, the prize being to get all the money and fuck everybody else over without a look back. Because he’s Henry Silva.

Point is its a low budget crime movie, some sort of French-American co-production taking place in France with a mostly french cast, but some of the actors (including Silva) are speaking english, others are obviously redubbed. This is by no means a great movie but it’s a good one if you can find it.

The picture starts out with Silva living the American dream: he wakes up in his cell, hits his two cellmates over the head with a pipe, builds a grappling hook out of a stool and sheet, and uses wet sheets to bend the bars apart so he can climb out (long story).

Then the second he’s out – because he’s not me or you, he’s Henry Silva – the bastard is back at it, stealing a gas station attendant’s clothes, wallet and motorcycyle, meeting with some rich dudes at a club, setting up an armored car heist. Eventually this turns out to be a scam he’s playing on them (fake gold, etc.) and they get him back by paying him with marked bills. And that’s when he becomes the Killer, or the Insolent, when he’s sick of fucking around, he decides to go to their club, kidnap one of their dancers, sleep with her (don’t worry, it’s consensual since this is French, not Italian), firebomb some cars, go out with a bang, etc. It’s nothing original but let’s be honest, it’s the type of stuff we want to see in a movie like this.

I think I might’ve actually seen part of this on TV one time, but maybe not. There’s a scene in here where they go to pick up one of their drivers at his day job, a sideshow act where a bunch of stunt motorcycle drivers drive around inside a big cylinder. Did I see this before or is there a better known movie that shows that? I can’t remember. It’s a pretty impressive scene unless it’s a ripoff of some other movie that I’m remembering.

Anyway, you already know this, but beware of Henry Silva. You can’t trust that fucking guy. No way.

Henry Silva
This entry was posted on Thursday, January 6th, 2005 at 10:41 pm and is filed under Action, Reviews. You can follow any responses to this entry through the RSS 2.0 feed. You can leave a response, or trackback from your own site.