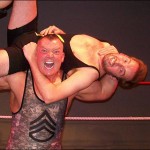 How can you go wrong with a premise like that? Well, they try their best to go wrong. After a nice lucha libre montage under the credits they introduce the obnoxious lead-trespasser, Alfonse, talking about that stupid concept called “the Dirty Sanchez.” I’m not gonna explain what it is because it doesn’t exist, it’s just some stupid bullshit some prick like this guy made up because he impresses himself by yammering about this type of stupid shit. Basically it’s a made-up sex act that would give no sexual pleasure but would be demeaning, racist and disgusting, so Screech did it in his porno dvd. 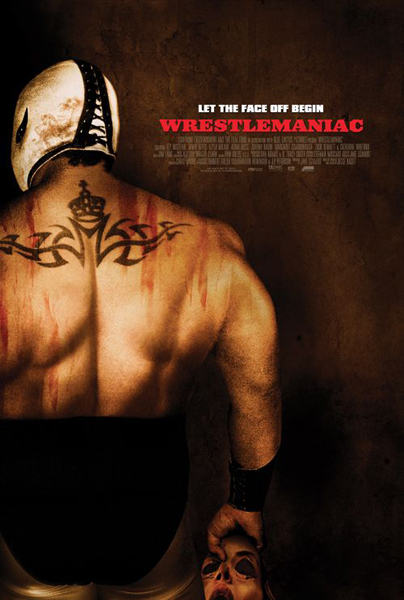 Why would it exist? Why would it have a name? And why do I want to watch the adventures of some corny wannabe redneck with stupid facial hair who thinks he’s cool for knowing about this type of bullshit? I know, you’re not supposed to like him. (Other than in SCARFACE if they show a character snorting coke it means you’re not supposed to like them.) But there’s a fine line between funny assholes that are entertaining to watch and stupid assholes that make you regret renting the movie (or turning to the Sci-Fi Channel, which is often the case with a character like this).

Anyway El Mascerado (played by authentic masked Mexican wrestler Rey Misterio Sr.) shows up and starts grappling people to death. I’d like to see some more wrestling moves, but he does throw people against walls and he has a makeshift ring where at one point he jumps off what passes for a turnbuckle and does an aerial move. Then once he considers them defeated he removes their masks, which is to say he tears their faces off with his bare hands. And squooshes them on his wall like a kid playing with fruit rollups.

The characters and dialogue are shitty enough to keep it from being a real standout movie, but it’s not without its moments. Once Alfonse is killed it becomes more watchable. There are some nicely handled scenes like one where El Mascerado beats the shit out of an intruder in his wrestling room, but you just hear the screaming as the camera slowly moves down a hall toward the closed door of the room. Then the door slightly opens so one of the other victims can crawl out.

The final girl is the exact same character as the Hot Girlfriend in MICHAEL BAY’S HASBRO’S TRANSFORMERS: bad acting, dumb sounding, big-boobed girl in cut-off jeans, but her dad was a mechanic so she knows how to fix an engine, which means she is a strong female character, possibly even a feminist icon for all your daughters to look up to. She lookes more Vivid than Maxim though, so it’s kind of goofy to see her running around at the end. But it’s justifiable because she is supposed to be a porn star, it’s not like CANDYMAN 3 where a blond gal from Baywatch is supposed to be an artist descended from Candyman. And there’s kind of a goofy/clever part where to hide in an oven she does what might be described as an immodest contortion.

I also gotta give WRESTLEMANIAC credit for not ending the way you expect it to. You know, in wrestling alot of times the guy that’s supposed to be the bad guy is the one everybody cheers for. Let’s just say the guy you’re cheering for goes home with the belt. Or not. Nobody knows. Don’t want to give anything away.

It’s too bad how many horror movies like this think they can get away with such stupid and unlikable characters doing such stupid and unlikable things. It’s lazy. But in this case, I guess they sort of can get away with it, because overall I enjoyed the movie. Some people might say “it’s about a killer wrestler, what do you expect?” but of course to me that’s a fucking fantastic concept, so I think it’s fair to hope for true greatness. This is not the classic it ought to be with that premise, but it is pretty fun. I liked it.

So I’m definitely hoping for a sequel and I would like to request that the sequel be about this: El Mascerado has been travelling from border town to border town wrestling people to death. Racist immigration vigilantes try to stop him and fail. An elite team of American soldiers corners him somewhere in Texas and tries to take him out, but they fail too. Now there is only one hope: the brother of one of the dead soldiers, a retired wrestler and Navy SEAL (Jesse Ventura [or Mickey Rourke]). Completely washed-up, his knees worn out from steroid abuse, he must overcome his physical limitations to defeat El Mascerado in the grudge match of a lifetime.

Or shit, what about this: a group of washed up old school wrestlers are in Texas doing a favor for some small time local promotion and they all have to take on El Mascerado to protect the good name of the sport. And they would try to get Roddy Piper and guys like that to play the wrestlers.

Well, whatever it would be about, I’d watch it.

DTV wrestling
This entry was posted on Wednesday, October 29th, 2008 at 8:06 pm and is filed under Horror, Reviews. You can follow any responses to this entry through the RSS 2.0 feed. You can skip to the end and leave a response. Pinging is currently not allowed.