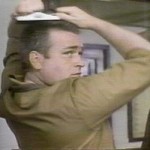 But I mean, that’s nothing to brag about. 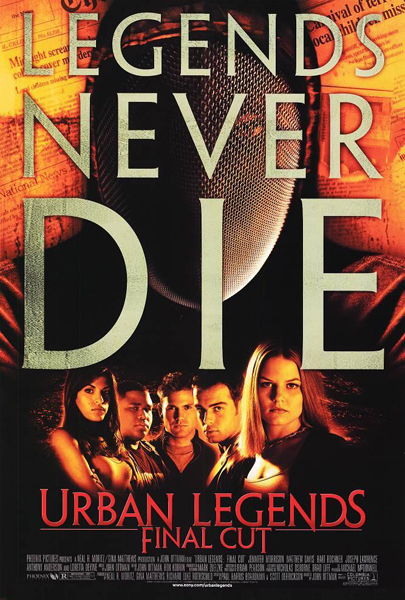 Before we go on let me just say that this review contains spoilers. So if you don’t want to know that at the end it turns out their professor is the killer because he’s trying to kill off the cast and crew of a student film that he is trying to take credit for in order to launch his Hollywood career, then read no further.

But then when you really think about it, I mean what kind of killings are you supposed to do? You can’t kill somebody based on spider eggs in bubble gum. You can’t give them a huge rat and convince them it’s a chihuaha, and then kill them. And if you break their neck and say yeah, this is based on the one about how the kid from the Michael Jackson Pepsi commercial broke his neck doing a neckspin – I mean, that would just be stupid.

So they don’t really use the premise. The film student in the movie uses it for her student film. And they keep talking about what a good premise it is. But the actual killer, he only does it once, when he kidnaps a girl and she wakes up in a bathtub full of ice and finds out she had her kidney removed. But then when you find out it’s a film professor trying to kill of the cast and crew of a student film that he is trying to take credit for in order to launch his Hollywood career, you wonder what the hell he was going for with that kidney thing.

So here’s what the movie is about. There’s this girl who looks and acts exactly like Felicity. She is the director of this urban legend movie. There are other film students directing other movies and they are all in competition for an award their school offers called The Hitchcock award. And they keep dying. And then Felicity meets the twin brother of the guy who committed suicide, but she can’t tell anyone because he has a shady past, but he doesn’t think it was suicide and they try to find out who killed him, and etc.

Along the way of course they introduce many different red herring type suspects. Guys who you are supposed to think is the killer. Most of them are the other film students, and then there’s a long haired weird kid with bad facial hair who hangs around the campus. At one point they even have this kid’s long hair hanging out of the back of the killer’s fencing mask. So you go, “I knew it! It’s that long haired kid!” And then it turns out to be wrong.

Now listen to me John Ottman. You can’t do that. That’s cheating. That’s poor sportsmanship. That’s filmatism for pussies. Are we really supposed to believe that this 45 year old film professor is running around with a long hair wig on and a fencing mask over it? It’s ridiculous. Get the fuck out of here.

The first killing is done with a handheld video camera, and it seems like a sure reference to the opening shot of Michael Powell’s landmark thriller Peeping Tom. But when recounting it later, the killer doesn’t even get his own reference. He defends his shaky camerawork by calling it “cinema very-tay”.

I mean, this movie is pretty fucking bad. But maybe there is something going on under the surface here. Maybe Ottman is trying to make an argument about the story’s setting, the generic american film school, that can only be made stylistically. If you went to film school, and you satirize film school in your movie, you can’t exactly do a good job. Otherwise you’re undermining your argument.

Because I’m guessing the individuals responsible for this picture really went to film school, so they must know what it’s like. If film school really is how it’s portrayed in Urban Legends: Final Cut then no fucking wonder we keep getting movies like Urban Legends: Final Cut. All the professors ever say is “mise-en-scene”, “cinema very-tay” and “the next Spielberg.” These three phrases are their soul contribution to the filmic education of these idiot kids.

There’s one scene where the professor is making a speech to the school to announce that one of their most promising students just committed suicide. And then he goes, “In Truffaut’s [whatever], he states…” blah blah blah. The only thing that would be more asinine would be if he started talking about Truffaut while he killed people. Which would be a pretty fucking good idea for a movie, now that I think about it.

And that just reminds me, there is alot of wasted potential here. If they can’t do the urban legend killings, they should at least go all the way with the film nerd killings. Let’s see the killer record a commentary track for the video of his murder. Let’s see him start quoting from the translated essays of Luis Bunuel while he kills people, and blaming his actions on postmodernism and the age of irony and his student’s lack of appreciation for John Ford westerns.

But it doesn’t go that far. I’m not gonna say the movie’s not funny, because it is a funny kind of dumb. But come on John Ottman, you can do better than this garbage. Let’s see some hustle, sport.

Hart Bochner John Ottman slashers
This entry was posted on Friday, September 22nd, 2000 at 7:43 am and is filed under Horror, Reviews. You can follow any responses to this entry through the RSS 2.0 feed. You can skip to the end and leave a response. Pinging is currently not allowed.