Alec Baldwin plays Mackin, a thief hired to steal food stamps from a printing plant. After the job some dirty cops pull him over and try to take his money. He handles it, but knows he had to have been set up by the guy who hired him, Pointy Williams (Michael Jai White) so he tries to get back at that asshole. Meanwhile “the Italians” aren’t gonna be happy about what Pointy did so his people keep trying to snuff out Mackin before things escalate and they get into deep shit.
It’s adapted from some book by a guy named Patrick Quinn, but definitely is gonna remind you of Elmore Leonard and that type of crime story where the characters have little funny quirks. Also like Leonard the plot is full of coincidence and mistakes, the characters are kind of dumb and talk about goofy things, but can also be seriously dangerous. 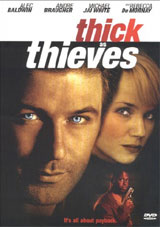 Mackin’s biggest passion is for his aging dog, Wally. He brushes the dog’s teeth, he brings it with him out of town (although it has to stay with a bartender when he’s doing the job), he refers to himself as “we” because he’s always including the dog. Part of the story is about him trying to prepare for Wally’s death. It kind of reminds me of something Charles Willeford’s character Hoke Moseley would do in one of his books. I bet they cast Baldwin because of MIAMI BLUES, where he played the guy who accidentally killed a hare krishna, then stole Hoke Moseley’s false teeth and badge.

Mackin is also a huge nerd for record collecting, which is a good excuse to put some old records on the soundtrack. Some of the jazz is good, balancing out a fairly cheesy score. I like the scene where he’s in a record store examining a record with flashlight, magnifying glass and white gloves – he actually puts more care into his record buying than his robberies. Which shows he has his priorities straight, come to think of it.

Andre Braugher from HOMICIDE: LIFE ON THE STREET plays Pointy’s #2, Dink. He’s probaly the most competent criminal in the movie, but he’s working with people with names like Sugar Bear and Hot Sauce so he gets frustrated with everybody. And good for White, who gets a much bigger and better character than he usually gets. Pointy tries to seem sophisticated and is very proud that he owns a French restaurant. But in one of my favorite moments he insults the chef by asking him to make a dish that’s actually Cuban, then scares him by “accidentally” “joking” that he’d murder him if he tried to switch restaurants.

There’s also a part where his mom implies he’s uppity because he asks for dijon mustard. I guess all those right-wingers pretending to be upset about Obama ordering dijon must be huge THICK AS THIEVES fans. Did you guys hear about that one? I know alot of you are from Germany, Great Britain, Canada, Australia and European country (top 5 countries after U.S. according to my statistics page – hello also to everybody else including Chile and Angola) so I should explain this one. A couple weeks ago President Obama and Vice President Biden went to some burger restaurant as a photo op when they were visiting Arlington, Virginia. The right wing radio, TV and web were quick to point out that they were NOT just a couple regular guys eating burgers because Obama had slipped up and ordered “like a spicy mustard or something like that, or a Dijon mustard, something like that.”

Sean Hannity did a whole story on it that ended with him saying, “I hope you enjoyed that fancy burger, Mr. President,” which I hope will become an iconic Edward R. Murrow or NETWORK type statement of outrage. But if you google “Obama dijon” you’ll find way worse than that, including a whole bunch of nitwits claiming that MSNBC “went to great lengths to cover up” this shocking scandal by not including a full condiment audit in their fluff report of the president ordering a fucking burger.

It’s funny because I know some of these people genuinely have philosophical disagreements with Obama, but this is still what they come up with to spend time talking about. Bush had the worst attack in our country’s history on his watch, badly fought two wars (one started based on obvious lies), dumped our economy into the shitter, made torture legal, wiretapped innocent civilians, used a terrorist attack to force a drastic rewrite of our basic civil rights, shockingly botched the response to a national disaster, etc. etc. etc. And these people weren’t upset about any of that shit, in fact they spent the whole time trying to justify it.

But Obama orders “spicy mustard” and they go on TV, on the radio, on websights, with straight faces, pretending to be intelligent adults, and openly claiming to be upset about it. Pretending to make serious arguments for why it is an actual issue. Adults. Who speak in sentences, and know how to put on their own clothes. They don’t even wear bibs, and they think they can get away with pretending they actually believe dijon mustard proves Obama is an elitist. They say that out loud and then they look at themselves in the mirror and presumably do not hate themselves. Actual human beings, hundreds of them. Can you believe this shit? I can’t. But I didn’t make it up.

Their argument is based on a 25 year old ad campaign for Grey Poupon brand dijon mustard, which showed British guys in limos loaning each other Grey Poupon. So Sean Hannity and other adults pretend to believe that that was a documentary expose about the truth behind who uses spicy mustard.

Hey, you stupid motherfuckers, have you ever noticed that they don’t advertise caviar on TV? You know why? Because TV is for advertising cheap, mass produced products like fucking mustard. Even at the time those commercials existed, when you were still young up-and-coming date rapists aspiring to ruin television, people watched and understood that it was not real, it was a joke about how this cheap ass product at Albertson’s supposedly tastes real fancy like something a cartoon rich person might eat.

You are insulting yourself, your country, and especially the people who listen to you by saying this kind of baby shit out loud. And by the way what is this bullshit where you pretend to speak for the working man? You’re fucking telling me you never had dijon on your burgers back before you ran a media empire? I don’t believe you. You’re a terrible liar. Sorry to break it to you Sean Hannity, but your staff is lying to you if they’re telling you that’s secret rich people mustard.  Normal working class people have been able to afford that shit for decades. It is available in little packets. Hey, what’s this I just found on walmart.com? 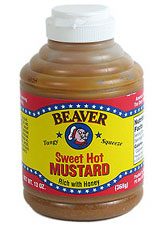 I don’t have a TV show, I don’t even own a house or a car, but I prefer spicy mustard on my hot dogs. It costs about the same and can be found in any grocery store or 7-11.  It has a cartoon beaver on the bottle. To be fair I guess he is a pretty classy cartoon beaver though. Probaly well bred.

By the way, am I gonna get in trouble for liking sauerkraut on hot dogs too? Or are you guys just policing burgers? I’m a little concerned because the cartoon pickle on the label wears a crown, that’s pretty elitist.

There’s something else I really wonder about. There are millions of people who watch Fox news and listen to these radio shows and what not. People who really believe this stuff. You cannot tell me that there aren’t at least 500,000 people in this country who both follow Rush Limbaugh, Sean Hannity or some of those guys, and enjoy dijon mustard. How do they feel listening to this? Do they feel ashamed? Do they feel they have to hide their taste in condiments? If past patterns of Republican bigotry have taught us anything it’s that the loudest critics of spicy mustard are the ones secretly enjoying it in airport bathrooms and at rest stops. I bet it is widely known in DC that many Republican senators take their mustard both ways. But nobody’s talking.

Sorry for the tangent, sometimes I gotta vent about these things. But man, can you believe Obama? The Republicans blew it so bad they went from controlling the government, the supreme court and the media to being the guy who shit his pants at the party and nobody will admit they invited him. And still, all Obama has to do to alienate them even further from the mainstream is order a cheeseburger. That’s power.

So, uh, THICK AS THIEVES. The style is not too slick, but not real gritty either. It’s decent but not stand-out filmatism, somewhat typical of a low budget independent like this. And it does feel a little formulaic in its quirk, a little self-conscious in the way all these criminals have a funny little thing they do, like the mafia guy is trying to set up his VCR during an important conversation, or Pointy is eating waffles or whatever. And the way everybody always refers to Mackin as “the thief” when Mackin is a perfectly good name. The tone is nicely balanced though – funny, but not at the expense of the story, not turning it into a comedy. There are some funny lines, and all the actors are good. You can see why this director would want to cast White as a larger-than-life character like Black Dynamite. His voice is so cartoonishly deep, it gives his lines a weird combination of gravitas and comedy.

Also I really like the way the story is resolved. It’s much more novelistic than movie-istic. It’s not some shocking twist or anything, it’s just not how these sorts of movies are supposed to end to be exciting, which makes it perfect. So it’s enjoyable.

Unless you’re a Michael Jai White completist I guess there’s no reason to send out a search party for this one. It’s more like one of those things you would catch on cable sometime for a nice surprise. I hope I didn’t give it away.

Alec Baldwin Andre Braugher Michael Jai White
This entry was posted on Tuesday, May 26th, 2009 at 12:53 pm and is filed under Crime, Reviews. You can follow any responses to this entry through the RSS 2.0 feed. You can skip to the end and leave a response. Pinging is currently not allowed.

30 Responses to “Thick As Thieves”