In my opinion MISTER LONELY writer/director Harmony Korine is a weird dude. He wrote KIDS for Larry Clark when he was 19, became a director with GUMMO and later did JULIEN DONKEY BOY. His movies are freak shows of improvisation, arty photography and the complete rejection of any mainstream idea of what a movie is supposed to be. As much as I have tried to push the idea of him directing a mainstream movie like a MISSION: IMPOSSIBLE it doesn’t seem to be something he’s interested in. Instead he hangs out with Werner Herzog, gets involved in that whole Dogme 95 deal, and makes weird books with titles like A Crack Up At the Race Riots. He’s also known for his bizarre interviews like on Letterman when he was younger or with a fan websight who he instructed to meet him in the projects, then spoke to them by phone for a while, then showed up and made them listen to Beyonce on a laptop while he sat in a lawnchair petting his dog.

So MISTER LONELY is the kind of movie a guy like that would make as he’s growing up slightly. It’s weird for weirdness sake, but kind of charming, kind of funny, kind of arty, very ridiculous. It has some dark and sad moments but not the same kind of punk attitude or shock value as the younger Korine. It’s just as strange but maybe more sincere. It’s kind of a sweet surrealist fairy tale with some beautiful images and colors as you can tell by these pictures. Also a part where Michael Jackson rides a mini-bike in slow motion with a monkey doll tied to the back bouncing up in the air like it’s flying. 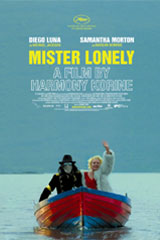 Diego Luna plays Michael, based on the later straight-haired era, sometimes with mouth mask, always with fancy coats and armbands. Like the real Michael his character is bashful and childlike, but he speaks Spanish and has a human nose. The other impersonators in the castle include Abe Lincoln, the Pope (John Paul II I believe), Queen Elizabeth (who I didn’t recognize as Anita Pallenberg, the Black Queen from BARBARELLA), Madonna, and for some reason Little Red Riding Hood. The Pope says the prayers (sometimes from on top of the castle), but is also a drunk and always encourages everybody to drink. President Lincoln is kind of the leader. The Three Stooges do the dirty jobs, like shooting the sheep when they get infected. Marilyn is married to a Charlie Chaplin, who’s kind of a dick and looks more like Robert Davi than Chaplin. When they fight Marilyn tells him that sometimes she thinks he looks more like Hitler. They have a daughter, “she lives as Shirley Temple.”

One weird thing: there is no Elvis. And no Bruce Lee. I would’ve liked if they tracked down Bruce Li to make an appearance. There’s no overlap either, not two Marilyns or anything. It kind of seems like they’re trying to collect one of everyone. When Marilyn tries to talk him into coming to the commune she says, “We need a Michael.” When she floats up in the boat she yells, “I found a Michael!”

If this sounds unbearable to you it probaly would be. But I’m the type of guy who enjoys seeing Abe Lincoln, the Three Stooges and Michael Jackson wearing yellow boots standing out in a field trying to figure out what to do about their sick sheep. It reminds me a little bit of other movies about outcasts forming tight-knit communities, but only in small ways. This is the kind of movie that’s not so much about telling a story as about setting up scenes around loose ideas and seeing what happens. For example, what happens when Michael moves out of an apartment (he says goodbye to the room and makes a speech about how good its been to him and how he will never forget it and hope it always remembers him). And what happens when a kid dressed as Buckwheat rides a Shetlund pony? (He talks lustily about naked women and chickens.)

Believe it or not, this also happens to have the most skydiving footage I’ve seen in a movie since POINT BREAK. I didn’t expect that going in. There’s a whole subplot (connected only in its symbolism) about Werner Herzog as a priest who flies a small plane to drop food to an impoverished village. One of his nuns falls out of the back and prays so hard she survives. So all the other nuns jump out of planes to prove their faith, and this leads to many nuns skydiving, one of them while riding a BMX bike. (I still don’t understand why you bring a bike with you skydiving. Just not that useful and probaly not good for the bike.)

Unfortunately Herzog doesn’t skydive, and he’s not as funny as he was in JULIEN DONKEY BOY. But he does have an incredible scene where he talks to a man holding flowers who wants to borrow his plane. He talks to him about why his wife left and gives him spiritual advice. The guy is obviously just some local they ran into, and his improvising seems amazingly natural. Then tears come out of his eyes and you realize this conversation is real. He might even think Herzog is a real priest.

I gotta admit, I am a Michael Jackson fan, and the persona of Michael Jackson is inherently interesting to me. I’ve written about my dream of a Julie Taymor directed Michael Jackson musical. I would also like to see a Jackson biography where he plays himself, and it goes over his whole life and career but continues into the future a thousand years like A.I. For the last half hour of the movie he lives in a tower with E.T. watching over a post-apocalyptic wasteland through a giant telescope and lowers down specially trained giraffes to help people who are in trouble. Or something like that – the story needs work. The point is I’m gonna be a sucker for a movie about a Michael Jackson impersonator, but I was a little concerned because obviously they didn’t get the rights to use the music. I had heard he uses other music, but mostly he just does the moves without music. So every once in a while it cuts to him standing on some rocks surrounded by water, spinning on his toes and throwing a finger up, making the different Captain EO sound effects. And he does a good job.

A few times a song title comes across the screen, like “Man In the Mirror” or “Thriller.” These titles seem to fit thematically and act as chapter titles, but I kind of wonder if they could also be hints to turn on those songs at those points. I wonder if it would match up at all? I had to return it to the video store before I got a chance to test out my theory.

Of course this is in no way a realistic look at the lives of impersonators, but it does make you think about the concept a little bit. CONFESSIONS OF A SUPER HERO does a good job of showing the kind of obsession, desperation and social awkwardness that can lead you to dress up as Superman, but is it even weirder when you’re dressing as an actual person? Obviously you gotta really like Michael Jackson if your’e gonna spend your life dressing up as him. Otherwise it’s gonna be a problem paying attention to the details of what he wears and how he moves. It takes a sort of idol worship but also it’s kind of belittling to yourself, saying that you would rather live in imitation of somebody else than be your own person. The character of Michael in this movie is not happy with himself, doesn’t like to see himself in the mirror, and hides behind the image of Michael Jackson. And of course he doesn’t seem to realize that Michael himself doesn’t like to see himself in the mirror and has been hiding behind the face that is now considered Michael.

I really liked this movie, which is good because I don’t think we’re gonna be seeing CAPTAIN EO 2 any time soon. This’ll have to hold me over for a while. By the way, if anybody wants to be my benefactor and get me the Michael Jackson auction catalog I’m not gonna stop you. He had a life-sized statue of himself wearing a Batman costume.

Harmony Korine Michael Jackson Werner Herzog
This entry was posted on Wednesday, May 6th, 2009 at 2:57 am and is filed under Drama, Reviews. You can follow any responses to this entry through the RSS 2.0 feed. You can skip to the end and leave a response. Pinging is currently not allowed.