Wendy and Lucy are an inseparable team, relying on their wits alone as they set forth on a harrowing cross-country trek from Indiana to Alaska. But when fate separates them, Wendy will stop at nothing to reunite with her friend… even if it means sacrificing everything she ah hell, I can’t make this shit sound exciting. This is actually a quiet, minimalistic movie about a girl and her dog stuck in a small town in Oregon with no money. Nice and simple. No explosions.

A skinnier than usual Michelle Williams plays Wendy. Her worldly possessions include barely enough cash to get to Alaska, an old Honda, the last dregs of a bag of dog food, a change of clothes, a dirty pillow, and her dog Lucy. We never find out what exactly she’s leaving behind, but clearly she couldn’t get things going back home and she knows how you’re supposed to be able to get money fishing in Alaska. 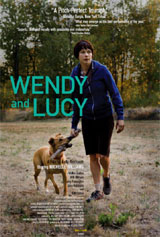 The appeal of the movie is the simplicity. It’s a raw slice of life, it does not have the kind of complicated thing many people mean when they talk about a “plot.” She sleeps in her car in a Walgreen’s parking lot, gets woken up by an old security guard who tells her she has to leave. But her car won’t start. He helps her push it out to the street, which will be her headquarters for most of the movie. There’s a repair shop nearby but nobody seems to be there.

Knowing she can’t spend any money and still make it to Alaska, especially considering she’s gonna have to pay something to get the car fixed, Wendy makes the mistake of trying to shoplift some dog food. She gets caught and turned in by a fuckin courtesy clerk and has to leave poor Lucy tied to a bike rack while she takes a trip downtown. By the time she gets back Lucy is gone.

So most of the movie is about her with no transportation, no shelter, no money to spare, sleeping in a park, cleaning up in a gas station sink, trying to get her car fixed and find her dog. And SPOILER she never becomes a millionaire like Will Smith in that one movie.

The Walgreen’s security guard (just “Security Guard” in the credits) becomes the closest thing she has to a friend. They have awkward conversations and he tries to help her in the little ways he can. That’s my favorite part of the movie because it’s a type of relationship that’s hard to describe exactly – that sort of bonding you can have with strangers while also not feeling like you actually know them at all. Like maybe some crazy shit happens downtown and you talk to some dude at the bus stop about it, but then when the bus comes you make a point of sitting in different parts of the bus and silently go your separate ways. This story threatens to become phony when the guard goes more out of his way to help Wendy, but when you realize he’s not helping her as much as he thinks he is it becomes even more sad.

If there’s one thing this movie is about I think it’s how people don’t know how to help each other and therefore they try to ignore somebody’s troubles in order to make things easier and less uncomfortable. Wendy is not a saint, she probaly brought some of her problems on herself. She obviously shouldn’t have shoplifted, and maybe if she doesn’t have enough money to get to Alaska she’ll have to bite the bullet and come up with a different plan. And we all encounter destitute people every day, it’s just not possible for us to help all of them. Even if we give some of them money it’s not really gonna fix things for them. So you can’t blame these people for not knowing how to help Wendy. And she doesn’t ask for their help anyway.

But still, you gotta have some sympathy for another human being in a tight spot. She’s got nothing, what’s she supposed to do? Get an education? Maybe use her broken down car as a dorm? The dialogue from the kid who catches her shoplifting is kind of unnatural, but there’s something true about that character. Of course he’s right that she shouldn’t be stealing, and he’s doing his job by catching her. But he has this sense of self-righteousness about it and kind of a “ha, I caught a bad guy” type of pride that you can recognize, and especially in a kid that age. This sense of what is “right” is more important than a stranger’s suffering. Have you ever seen a lady get caught stealing food? It’s the saddest shit ever. There is nothing right about the situation. The manager of the store seems hesitant, I think he wishes his employee just didn’t say anything, but he feels like he has to call the cops anyway.

I mean, most people wouldn’t let her go. It’s just a shitty situation no matter what they do. In that kid’s head, though, he’s the hero of the day. He caught the shoplifter.

But man, they should’ve let her take her dog with her to the station! That’s the real villain of the picture is the cop who ignores her when she tries to tell her that’s her dog. I’m starting to think N.W.A. was right about the police.

A few of the incidental characters don’t feel as natural as Michelle Williams does, but she and the security guard do a great job. Will Patton steals the movie when he appears as the mechanic. He’s not necessarily an asshole but he’s completely oblivious to how fucked Wendy is, and keeps taking phone calls in the middle of his conversations with her. This seems like a real guy. I kind of like him and kind of hate him.

For WENDY AND LUCY is captivating in it’s rawness and lack of detail. And it’s only 80 minutes long including credits. It’s a sad little movie, there’s not much to it, but I liked it. In conclusion, this movie is EXPLOSIVE, it will thrill the shit out of you, biggest movie of the summer. The DIE HARD of indie poverty dramas.

Kelly Reichardt Michelle Williams Oscilloscope Laboratories
This entry was posted on Tuesday, May 5th, 2009 at 2:10 am and is filed under Drama, Reviews. You can follow any responses to this entry through the RSS 2.0 feed. You can leave a response, or trackback from your own site.

10 Responses to “Wendy and Lucy”