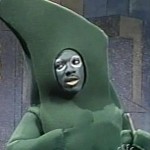 What this picture is about is these two kids who go around riding their bikes and hunting cats, and there are alot of filthy houses, and ugly rednecks talking shit about the blacks and punching each other. Then they find a dead cat and just keep shooting it with pellet guns. In the opening scene two kids are making out in a junkyard and the boy finds a lump in the girl’s tit. Later this guy is trying to make out with a black midget and Chloe Sevigny teaches her little sister how to pull hairs out of her nipples with duct tape. 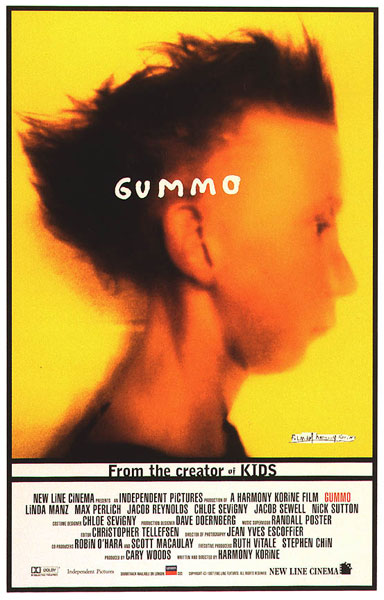 Well I gotta be honest this pictures makes no damn sense, it is kind of amateurish and pretentious and exploitative. But I kind of liked it too. You see it is like a home movie, but a real good one. The gal who directated it, Harmony Korine, is real good at finding weirdos and videotaping them acting up. So my two favorite scenes are just showing these people acting crazy and I’m pretty sure they’re just being themselves. One is just these two brothers in the kitchen, and they start punching each other as brothers sometimes do. And they’re laughing and being competitive and they just start really punching the shit out of each other and knocking plates off the counter and it’s all in fun. I mean jesus to think I used to have that kind of aggression too. In real life it’s sad but in pictures it’s funny, because it’s sad.

There is another character who always wears bunny ears, and the real good scene is when these two little hellions like maybe 10 years old are dressed up as cowboys smashing cars in the junkyard. They come across the rabbit and they pretend to kill him with cap guns, and they start cussing up a storm, calling him queer and yelling like drill sergeants as they check his pockets for money and poke him in the ribs to find out how much meat he has on him. Well I guess you had to be there but it’s a hoot because, I mean, jesus. How did those kids get that way anyway.

And I mean, think about it, if that was your home movie you’d be pretty damn proud, and rightly so. Unless they were your kids then it’s debatable.

Maybe the guy with bunny ears is Gummo, I’m really not sure.

Anyway the whole no plot/makes no sense thing starts to get old after a while, and there is alot of scenes where you can feel Harmony trying a little too hard to be weird or shocking. But still you gotta admire the lady for her spunk. This is a movie that really doesn’t follow the rules, it tries to break boundaries by taking on weird subject matter, random editing, intentionally sloppy filmatic techniquery, garbled narration, no plot, made up as they go along, etc. It is an experiment that doesn’t always work and maybe is not always well intentioned but I’m still glad the lady did it. As long as the Art of Cinema is an artform we will need gals like Harmony Korine to remind us that you don’t need to just copy what everybody else is doing. This is not too bad of a debut and I think there is a good chance she will grow into someone real interesting, a director of real importance, although you never know she might just end up as a dancer or something.

??? Chloe Sevigny Harmony Korine
This entry was posted on Saturday, January 1st, 2000 at 12:55 pm and is filed under Drama, Reviews. You can follow any responses to this entry through the RSS 2.0 feed. You can skip to the end and leave a response. Pinging is currently not allowed.