Speaking of small time horror remakes, the STEPFATHER one came out on DVD a week or two ago. This is another one where it’s not really a big name for the teens to have heard of like NIGHTMARE ON ELM STREET or something, so it’s kind of weird that they bothered. But the source material is an underrated movie with a good, simple premise, so that’s attractive. I think the original’s script by Donald Westlake is real good, but it’s definitely elevated by a great performance by Terry O’Quinn. And that guy’s apparently on the popular television program LOST, so you’d think they’d just push the original on the kids and not bother with a new one. You’d think that – but the old one doesn’t have text messaging in it. The new one does. Also, internet research instead of going to the library. It’s a whole new ball game.

Unlike SORORITY ROW this one actually stays very close to the original, not adding much or taking much away. Therefore I think it’s only fair for me to be allowed to just re-use most of my review of the original here. 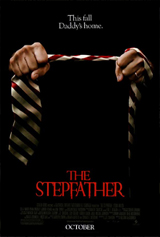 this is an ’80s horror/suspense thriller, kind of feels like one of those Psycho sequels they made back then. At first I thought it would be cheesy because it has one of those ’80s scores that wants to sound like a whole orchestra but who are they foolin, we all know it’s just one measly keyboard. Sounds like the Full Moon Videos they used to have, about all those little fuckers running around on the ground with knives and crap. Haunted puppets and killer ghoulies and shit. is a remake.

But this one’s not like that, it’s smart and disturbing and maybe even classy. According to an interview I read, Donald Westlake was hired to write a script based on a one line treatment, which was itself based on an actual case. Some nutbag somewhere killed his own family and disappeared, and they found out that three weeks before he killed them he had quit his job, and every day pretended he was going in to work. The idea of the original movie is was, what the fuck was this guy doing from nine to five during those three weeks? And the movie’s answer is he was setting up a replacement family across town. But for the remake he just sets up again after killing the first family. A complete and total reinvention for a new generation, in my opinion.

The killer stepfather is played by Terry O’Quinn, who now is known for playing tough bald cops and FBI agents and individuals of that nature. Back then he was skinnier, looked just like fuckin Ted Bundy which I bet is why they hired him. Dylan Walsh. Opening scene he has just killed his family, and he calmly shaves his beard, changes his appearance. As he’s leaving, he puts away a couple of his daughter’s toys that are laying on the floor. A nice touch. Then walks past her bloody mutilated corpse. Strolls away whistling “Camptown Races.” This scene takes place in Bellevue which is exactly where this type of shit would happen, the rich people city east of Seattle, across the bridge.

Next thing you know he’s about to be remarried, working real estate, making speeches to his neighbors about how he hopes he’s selling them more than a house, he’s selling them a lifestyle. important family is to him. He acts like a nice guy but his soon to be step-daughterson knows what time it is. Actually, she doesn’t have any reason to suspect him at first, but because she hates seeing her mom with this fucker she catches on to him quick. So it catches that feeling of how people feel when their mom has a new boyfriend. But in this case they are completely right about the boyfriend.

I think J.S. (THE MARKSMAN) Cardone’s adaptation of Westlake’s script is good but it’s Terry O’Quinn Dylan Walsh that’s gonna make or break the movie, and what he does is, the first one. He makes it. There’s one scene that’s actually pretty fuckin scary where the step-daughter gets sent to the cellar to grab some ice cream for the neighborhood picnic and sees O’Quinn flippin out, yellin gibberish to himself. Then he realizes she’s there and has to explain it, saying he’s a salesman, he has to smile all day, he needs to let things out sometimes. “You know how it is.” He seems so authentically nuts in the scene though, it’s pretty spectacular. Good one, Terry O’Quinn. not an ice cream scene though.

Director Joseph Ruben Nelson McCormick also did some movie called THE SISTER-IN-LAW PROM NIGHT about a fucked up sister-in-law. remake of PROM NIGHT. So the moral is, don’t marry into this guy’s family. You’re not welcome there. some day soon every horror movie will be made at least twice.

Despite the complete needlessness of THE STEPFATHER (2009), I do have to say that it’s a completely solid movie. I enjoyed it. Although Walsh doesn’t make quite the impression that O’Quinn did (maybe because he re-creates the “who am I here?” scene but not the ice cream/basement freak out) he is very good as a kind of hunky, well-meaning guy with a completely psychotic side. Come to think of it this could almost be a Van Sant PSYCHO situation, trying to use the exact same material but allow a new cast to see if they can successfully play it in a different way, not just an imitation.

Nothing drastic but Walsh does  put a little bit of a different spin on it. O’Quinn’s Stepfather was manic in his pursuit of traditional family values. His murders were partly about judgment, trying to erase people who didn’t fit into his ideal world. For example he shows a house to a guy who offends him by talking about swinging or something, so he kills that guy. It was a statement, not a strategic move.

I think Walsh’s character is sometimes genuine when he’s acting nice. He’s sincerely trying to be a good husband and stepfather, but he can’t keep this psychotic side of himself under control for long. So when he fucks up he has to cover his tracks and then when it gets to be too big of a mess he knows when to call it quits. He has to reboot and start over.

See, “reboot” never would’ve been a concept you would use when the original was made. This is some 21st century shit right here.

So I have some respect for it, and begrudge no one for watching or enjoying it. It’s kind of like the remake of IT’S ALIVE – I got nothing against it as a movie other than that it never needed to be made. There was already a real good one that this adds little to, and is not as good as.

remakes
This entry was posted on Wednesday, February 24th, 2010 at 3:36 am and is filed under Horror, Reviews, Thriller. You can follow any responses to this entry through the RSS 2.0 feed. You can leave a response, or trackback from your own site.