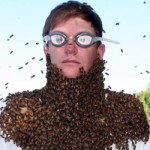 Well as you know I am always searching for straight to video movies that don’t suck. And even I sometimes forget why that is my mission, so let me put it down in writing here as a reminder. See, in the old days you had b-movies, you had exploitation movies, etc. And the idea of these movies was low budget, lowbrow, easy investment quickie moneymaker. Like squeezing out sausages. And there was alot of disposable garbage made, because that was the whole point. But within that world there were people like Roger Corman, William Castle, Jack Hill etc. who sometimes made movies that transcended just being a product, movies that some people still watch and hold dear today. Lots of directors like John Sayles, John Demme and maybe one or two other guys got their start working on cheapo Roger Corman movies about women in prison or giant alligators. Also unfortunately Ron Howard but that doesn’t count. And people like George Romero and Sam Raimi started with low budget independent movies made for the drive-ins, movies that nobody would expect to still be considered great all these years later.

So my theory is, there has got to be SOMEBODY out there with an imagination that somehow ends up making a straight to video movie. So maybe they get hired just to shoot some tits and pretend it’s a sequel to Cruel Intentions or Wild Things so they can make a profit on pre-orders to Blockbuster and nobody will have to actually watch it. But they decide they’re still gonna put their personal stamp on it and somehow they make it great. Or they have a unique vision but they don’t have their foot in the door yet so what they manage to do is make a no budget movie that at least gets released on video. You know that’s GOT to happen, but you don’t see it very much. But I’m looking for it.

Well the latest lead I got is this guy Josh Olson who wrote David Cronenberg’s A HISTORY OF VIOLENCE, one of the best movies I’ve seen this year. But it turns out before he got that script to Cronenberg, all he had done was straight to video movies starring Eric Roberts and Casper Van Dien! He claims they’re terrible, but who knows, this could be my guy. The jury is still out.

I started with INFESTED because he directed this one and the story behind it is pretty funny. Apparently he was discussing the movie THE BIG CHILL with somebody and he came up with this theory that it’s a FRIDAY THE 13TH movie where Jason never shows up. You got all these people and couples hanging out together, discussing relationships and crap, but nobody ever gets killed. Well I never seen THE BIG CHILL but according to my research this is pretty much a straight ripoff – a group of old friends are reunited for the funeral of their friend who committed suicide. They all have different philosophies, one is a TV star, one is a drug dealer, they got old attractions, they worry about if they chose the right path in life, etc.

But then the difference is, they get bit by killer flies and turn into horrible zombies that shoot swarms of bugs out of their mouths. So it’s like THE BIG CHILL meets NIGHT OF THE LIVING DEAD, they gotta hole themselves up in a house and figure out what to do.

So it’s a fun movie, definitely more watchable than the vast majority of DTV movies. You do have to be forgiving though because it is cheap and amateurish in way that it doesn’t seem like the real BIG CHILL or NIGHT OF THE LIVING DEAD. The CGI bug effects are probaly the worst I’ve ever seen. Not that I can blame them, I’m sure they did the best they could with no money, and there are some good weird fucked up ideas for what happens with the bugs. But believe me, they look phoney.

I also think they miscast Zach Galligan as the hunky TV doctor. I mean don’t get me wrong, Zach Galligan has had a wonderful career ranging all the way from GREMLINS to GREMLINS 2. But he doesn’t look like a TV stud. There is another guy in the cast, a square jawed hunk, who does look like a TV star, but is not playing one. So it’s kind of weird.

But if you ever wanted to see the guy from Gremlins stabbing a huge festering wound on his leg with toe nail clippers trying to kill mutant flies that are crawling around under his skin, this is your movie.

The main character or “final girl” surviving female character is played by Amy Jo Johnson who is apparently “the Pink Ranger” from Power Puff Rangers or whatever. Also she may have played Julie Emrick, the troubled, guitar strumming best friend of Felicity who was searching for her birth mother and also stole Ben from Felicity even though she knew Felicity moved to New York and went to this school solely because of her high school crush on Ben. I heard. Anyway pink ranger is actually a decent actress and is the most sympathetic character in the movie, because she makes fun of the others for being whiney yuppies.

I’m a sucker for these rare movie premises that are all about fucking with you. “What if it’s THE BIG CHILL but then all the sudden one of the characters gets his head cut off and bugs crawling in his veins?” “What if it’s a getaway movie but then halfway through the movie out of the blue they get attacked by vampires?” Or “What if it starts out as a documentary about Michael Medved going on a book tour but then all the sudden it turns into a hardcore gay porno?” Or whatever. The problem is, for business reasons, they can never quite release the movie keeping it a secret. So they had to call this movie “INFESTED: THE INVASION OF THE KILLER BUGS” and show killer bugs on the cover. It’s like AUDITION, it would be so much better if it just had a generic title and you saw it on Lifetime not knowing what it was gonna be.

So it doesn’t really work as well as you want but you gotta give the guy points for trying. Nobody else does. It’s definitely more watchable than the vast majority of the straight to videos I’ve seen. Although it woulda been better with Wesley Snipes. But you could say that about anything.

DTV Josh Olson Zach Galligan
This entry was posted on Thursday, October 27th, 2005 at 12:25 pm and is filed under Horror, Reviews. You can follow any responses to this entry through the RSS 2.0 feed. You can leave a response, or trackback from your own site.