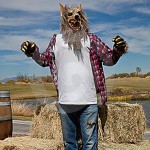 THE HOWLING is directed by Joe “GREMLINS” Dante, so it has his usual Cormanite monster nerd business: Dick Miller in a supporting role, cameos by Roger Corman and Forrey Ackerman, some black humor here and there. But the tone is more serious than AMERICAN WEREWOLF and way more serious than anything else Dante’s ever done. Filmatically I would say it’s his best directing job by far. Instead of AMERICAN WEREWOLF’s contemporary twist on urban gothic THE HOWLING starts out as straight up sleazy urban noir, werewolves in the world of serial killing and bondage porn. At times it feels more like a David Cronenberg than a Joe Dante. 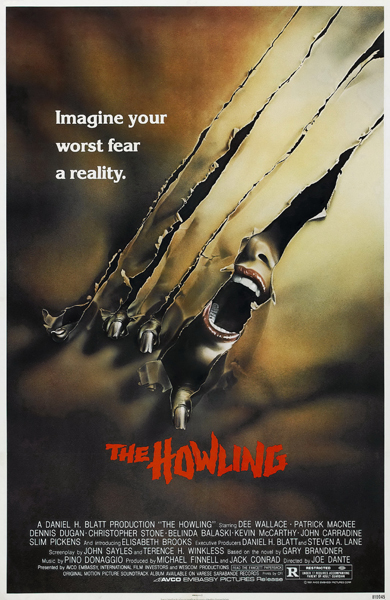 Most of the movie takes place at The Colony, a place her famous author psychiatrist runs. It’s kind of a resort – you hang out outside at night under strings of lights, drinking locally brewed beer and listening to people play fiddle. A good way to live for a while, I bet. There are weirdos, though – everybody’s a patient. There’s the old guy who tries to end it every night by jumping in the campfire. And there’s this nymphomaniac who’s after Wallace’s husband (who, by the way, looks kind of like Charles Bronson, I noticed). I mean if you were staying here it would be fun at first, and you probaly wouldn’t suspect werewolf activity like you do as a viewer. But you would start getting a creepy WICKER MAN (original) type feeling pretty quick. Even before the cattle mutilations begin.

Now, if I gotta pick the best man-to-wolf transformation sequence, again I gotta go AMERICAN. Because I’m patriotic. That scene is so brilliant the way it’s put together, that poor bastard screaming his lungs out, you know it hurts like a bitch. And the use of the music, “Blue Moon” I believe. Hilarious and awful. Perfect. But again, very admirable silver medal for THE HOWLING effects by Rob Bottin, who I know is a genius because he did THE THING. I believe he’s also the guy who designed the Robocop suit. His approach on this (apparently with consultation by AMERICAN WEREWOLF’s Rick Baker) is more traditional scary than Baker’s, without the dark humor. But it’s a similarly slow and detailed look at different parts of the body bubbling and stretching and making subtly disgusting sounds. What these two scenes did for latex makeup effects has not yet been done for the digital equivalent. I’m not sure digital could ever have the same weight, because your brain knows it’s not looking at a physical object. But you could do something cool, I’m sure, instead of the usual quick morphs. Take your time with it like this one.

The music is by Pino Donaggio, an Italian I believe, and for sure the guy who did CARRIE (I have the record of that one). The script is by John Sayles, fresh off of RETURN OF THE SEACAUCUS SEVEN. And the character of Chris is played by Dennis Dugan, director of YOU DON’T MESS WITH THE ZOHAN. So it’s class all around. And it has an ending great enough to hold its own against Landis’s diabolical punchline.

And now that I’m finished with this review I feel like an asshole, because that was almost 30 years ago that these two werewolf movies came out in the same year, and I’m still comparing them. But really it’s not because they came out close together, it’s because they’re both so damn good in a genre that is generally not high on my list of priorities. So let me be clear, THE HOWLING is not an also ran. It’s some good shit.

Joe Dante werewolves
This entry was posted on Saturday, October 11th, 2008 at 12:04 pm and is filed under Horror, Reviews. You can follow any responses to this entry through the RSS 2.0 feed. You can skip to the end and leave a response. Pinging is currently not allowed.

5 Responses to “The Howling”