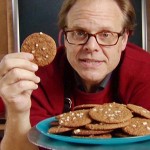 Nice of Vern to go out of his way to review this sequel since he reviewed the original for us. Personally, I thought this one smelled like a direct-to-video sequel when we watched it at BNAT 5 this year, and I’m not really aching to see any further adventures of the Ginger Snaps sisters. Not every horror film has to inspire a franchise if it makes a few dollars, folks. Anyway… enough from me. Here’s Vern.

A while back I reviewed for you boys a real good canadian teen werewolf picture called GINGER SNAPS PART 1. That was a real smart and original low budget picture for the teenage girls sort of like HEATHERS but with less showoffy dialogue and more werewolves and crap.

Well today I got me a special treat and that was a screener of GINGER SNAPS 2: UNLEASHED. There are alot of part twos coming to the video market this year and it’s very exciting but I guarantee none will be as good as this one. Also I know I had nothing to do with it but still I feel like I should personally apologize for that title. It means nothing! I mean might as well be GINGER SNAPS: RESURRECTION. Or reloaded or full throttle or farewell to the flesh. Or GS2 RETURN OF THE SNAPPING GINGER. That’s just a dumb title. Other than that I got no complaints about this well made sequel. 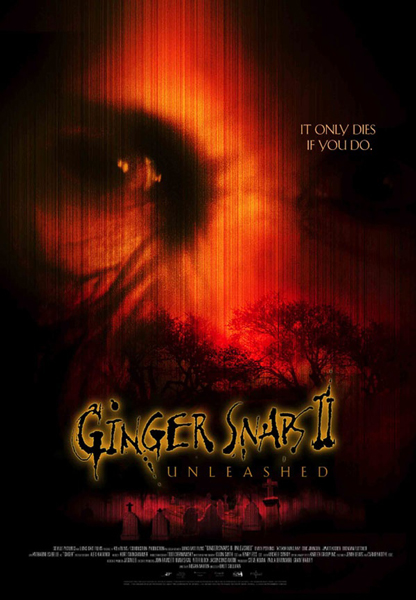 As you remember (well, I didn’t, but I’ve been punched in the head alot) our young female werewolf friend Ginger died at the end of GINGER SNAPS PART 1 (pre-unleashing). And her younger sister Brigette was left with the werewolf in her blood. In the world of this movie (Canada, I guess) werewolves do not turn back and forth from human to wolf, they turn slowly but permanently from human to wolf. Let’s call it being unleashed.

Well Brigette doesn’t want to be unleashed so we find her living in a ratty apartment shooting up wolfsbane and cutting herself repeatedly to time how long it takes to heal. (These movies show sympathy for outcasts and fuckups, so it makes sense that she would appear to be a junkie and a cutter.) But she gets attacked by a werewolf, faints in the snow, and wakes up locked up in rehab. Where it’s much harder to get syringes and wolfsbane. Which could cause problems for a young gal on the verge of unleashment.

Like I said the movie is called Ginger Snaps 2 Unleashed so of course it’s gotta have Ginger (the one who snapped) somewhere in there. So what they do is they have her sort of haunting Brigitte and giving her crap, like that fucker in American Werewolf. But she sort of disappears right around the time Brigitte makes friends with a crazy little girl in the hospital named Ghost. (The girl’s grandma is all burnt up and she likes comics and they share the rehab with a burn ward or something and it’s a long story just watch the fucking movie asshole what do I look like, the guy who does cliff’s notes? Cliff, I guess would be his name? jesus.) At this point Brigitte starts to be more like her older sister, she starts going through a Sexual Awakening type deal (her unleashing is a metaphor for that exact type deal) and like many teenage girls is attracted to the biggest asshole guy around. (Actually the only guy – an orderly who gives the patients drugs in exchange for blowjobs.)

No, come to think of it there is one other dude in the movie. There’s a werewolf that keeps showing up because he wants to do Brigitte. He keeps blowin his shot though so instead he just mauls people. So that’s another reason why this gal has to get the fuck out of there. Things could get ugly. They could get unleashed.

Hey did anybody else see the ad they have now for ads? I swear on the holy nuts of Jesus that I saw an ad where a coke-like bottle spins around and reveals a coke-like logo that says “Advertising.” At first I thought it was for adbusters or something but it turned out to be from the Advertising Council. Are you fucking kidding me? You need an AD for ADS? I never understood why they needed ads for milk or cotton, but this is so much more nuts. Trust me guys, even if every single person in this country who does not work in advertising woke up one morning and decided to burn every TV set, paint over every billboard, tear out every ad in every magazine and every newspaper, shred every t-shirt with a corporate logo, throw Grimace and the Afflack duck in Guantanamo Bay with no charges, and line up and execute every single person ever associated with Regal Cinema’s “The Twenty”… and then if we all hopped on the George W. Bush Memorial Super Anti-Steroids Rocket to Mars to leave this burning pile of advertising wreckage in the dust, never to be seen or spoken of again… even then, I guaranfuckingtee you we’d get there and there’d be a fuckin’ McDonalds “I’m Lovin’ It” billboard on the ancient martian pyramids. And the ghosts of mars would come out and their piercings would have the Nike swoosh on them and their tattoos would all be advertising logos like god damn NASCAR patches and they’d be holding Nokia cell phones and singing about pepsi and they’d be sweating martian gatorade and I don’t know how this is even possible but they’d definitely have popup ads shooting out of their asses. WE CANNOT ESCAPE ADVERTISING. THERE IS NO NEED TO ADVERTISE FOR THE CONCEPT OF ADVERTISING. THERE WILL NEVER AND HAS NEVER BEEN A NEED TO ADVERTISE ADVERTISING. YOU PEOPLE ARE FUCKING INSANE AND YOU’RE RUINING EVERYTHING. GOD DAMN IT. p.s. fuck all y’all.

UNLEASHED is not from the same director as GINGER SNAPS PART 1 but it’s directed by the editor of that one. And it’s got the same sort of spirit, tone and etc. Dark humor, but never jokey. Sympathetic toward weirdos, psychopaths and even the asshole orderly. Character driven, monsters mostly off screen, but a little better with the makeup effects this time. And the teenage girl themes, puberty and all that crap.

At the same time it’s not a retread at all. Different setting, different story, different characters except for Brigitte, who is different in this movie than she was in the last one. (She looks a little prettier and less like that hermaphrodite in SLEEPAWAY CAMP, but I still wish she kept her pants on.) And the acting in this one is great, especially the little girl that plays Ghost. That was a good find on the part of the Canadians. First they get health care and affordable medicine and mostly stay out of the war, now this. When will we ever catch up with these guys.

This is pretty much the ideal sequel. Not like BLADE II where you think HOLY FUCK HOW DID THEY MAKE A SEQUEL THAT FUCKING SPECTACULAR? but more like, you know, maybe the first one is technically better but this one really lives up to it real good.

I predict that most people who liked the first one, except the ones who get on your nerves anyway, will enjoy this movie. I also predict that Entertainment Weekly will use the phrase “wolfgirl interrupted” somewhere in their review.

see you around boys thanks for everything

Thanks, man. Always a pleasure to hear from you.

werewolves
This entry was posted on Wednesday, February 4th, 2004 at 10:04 am and is filed under AICN, Horror, Reviews. You can follow any responses to this entry through the RSS 2.0 feed. You can skip to the end and leave a response. Pinging is currently not allowed.

One Response to “Ginger Snaps 2: Unleashed”