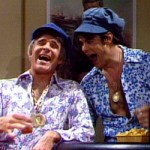 THE WILD MAN OF THE NAVIDAD is a ’70s style low budget horror movie that’s going to be playing the Tribeca film festival in New York later this month. But it originates from Harry’s neck of the woods. The “Wild Man” of the title is a mysterious being – sasquatch? lunatic? – who lives near the Navidad River in Sublime, Texas, does not necessarily have the best manners, and may or may not take some bites out of any animals or humans that encounter him. 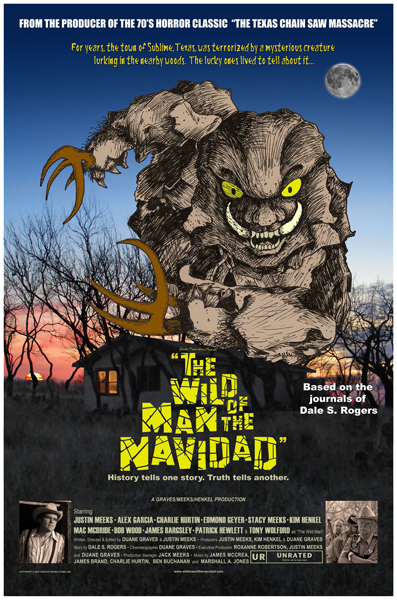 The lead character Dale S. Rogers (played by co-writer/co-director Justin Meeks) is a quiet outsider who, after being fired from his job as a welder, decides to open up some of his land to hunters for extra money. This is where the Wildman lives and where the trouble begins. Wild Men aren’t picky about what they eat. Plus they get vengeful when people shoot at them.

Dale already has a troubled life even before he’s kind of responsible for the deaths of hunters. His wife is in a near-vegetative state due to a car accident, for one. And as the owner of this land he has taken on an unpleasant duty. One nice moment in the unfolding of the story is when Dale is arguing with his faithful manservant/live-in nurse/I’m-not-sure-what-he-is Mario when suddenly the grandfather clock strikes 9. They stop cold, give each other a solemn look, and then Dale puts a plate of rabbit meat on his doorstep. They sit inside and listen in horror as some beast comes by and enjoys his dinner. Imagine if you had to do this every night. Better than watching American Idol or whatever they have on at 9, but probaly gets old after a while.

The story seems to take place in the ’70s (so I guess it would be Lawrence Welk on at 9) and stylistically it’s definitely a throwback. You got some LEGEND OF BOGGY CREEK in the beginning, with narration and maps and everything, and that’s obviously what the subject matter most closely resembles. But the two movies it most reminded me of were the original TEXAS CHAIN SAW MASSACRE and the non–horror LAST NIGHT AT THE ALAMO. That’s not a coincidence. WILD MAN is produced by Kim Henkel, producer and writer of both of those, and mentor to directors Meeks and Duane Graves since he was their film professor at Texas A&M. (That’s also why they sent the movie to me, by the way. They know I’m a sucker for anything CHAIN SAW related. Well played, fellas.)

From CHAIN SAW you’ve got the opening credits, the droning score and atmospheric shots of dry, weathered Texas locations. But it’s the ALAMO stuff that’s most interesting to me. When the story’s not showing what’s going on on Dale’s property it’s often showing the good old boys and moonshiners hanging out shooting the shit at a tavern. In fact, Kim Henkel is seen in some of the bar scenes and I assume he’s playing his character from ALAMO since his name is Lionel again.While way, way, way too many horror movies are youth oriented these days, most of the supporting cast here are greying old Texans they must’ve cast while they were scouting locations. Some deliver their lines better than others, but any lack of acting skill is a worthy trade off for the grit and authenticity of real people over actors. (And none of them are as bad as some of those guys in BOGGY CREEK.)

So it has more of a texture to it than your usual formulaic horror. It’s not just about hitting the horror beats, it’s also about bearded old coots arguing about the smoke from their moonshine rigs. One touch I thought was kind of hilarious and creepy is that the character of Mario is portrayed as fairly heroic for most of the movie, but is also seen trying to molest Dale’s disabled wife. In fact he’s introduced with his pants down, sniffing her panties. I bet you don’t get that in the remake of PROM NIGHT.

The monster itself is left fairly mysterious. He’s mostly seen as a moving pile of pelts and antlers. I kind of wish they would’ve found a taller dude to play him so he has more of a sasquatch look. And to be honest I might have gone for a little more violence. But oh well. I’m sure I’d get out of the way if I saw that fucker coming.

One thing I didn’t realize while watching the movie is that the “Wild Man of the Navidad” really is a Texas legend and not just a fake one made up for the movie like Blair Witch or The Legend of Curly’s Gold. The Wild Man (or sometimes Woman) of myth was maybe not as vicious as this one, but would do odd things like replace fat pigs with skinny ones and steal knives and saws only to bring them back later sharpened and polished to perfection. According to many accounts the man turned out to be an escaped slave hiding out in the area. But this version of the story alleges that that wasn’t true, and purports to be based on the journals of a real Dale S. Rogers who encountered the monster(s) many times after that. (So I guess Dale knew about Mario sniffing his wife’s panties if that was in the journals.)

One thing I wonder about these “lost journals” type stories – how many people really write journals? Does this welder/beast tamer seem like a dude that keeps a diary? Not really. But oh well. Suspension of disbelief. At least it’s not a faux-documentary.

Now, I’m not gonna say that this is a re-invention of horror or the next big thing or anything like that. This is a small movie and it’s not for everybody. Even if I thought it could catch on big I wouldn’t want to say it because I’m so tired of those internet-approved indie horror movies like BEHIND THE MASK and HATCHET that I hear about for a year and then when I see them I wish I didn’t bother. But to me personally this was a nice, effective little movie and I won’t be surprised if we hear more from these guys in the future.

Duane Graves Justin Meeks
This entry was posted on Saturday, April 12th, 2008 at 3:35 pm and is filed under AICN, Reviews. You can follow any responses to this entry through the RSS 2.0 feed. You can skip to the end and leave a response. Pinging is currently not allowed.