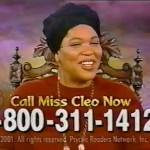 After years of being hard to find even in its crappy cropped VHS form, and weeks of being recalled because there was a problem with the sound, this week finally sees the DVD release of Lucio Fulci’s THE PSYCHIC from Severin Films (an up and coming label that mostly releases old EMANUELLE movies and things like that). They say it’s “Uncut For The First Time Ever In America!” which apparently means there were some scenes cut out in the old version, but does not mean it is some kind of unrated gorefest that will make you puke or challenge your religious convictions. This is one of Fulci’s thrillers, made in 1977, a few years before he started stabbing eyeballs in his horror movies like ZOMBI and THE BEYOND. It’s got its moments but it’s not as extreme as the stuff he was later known for. 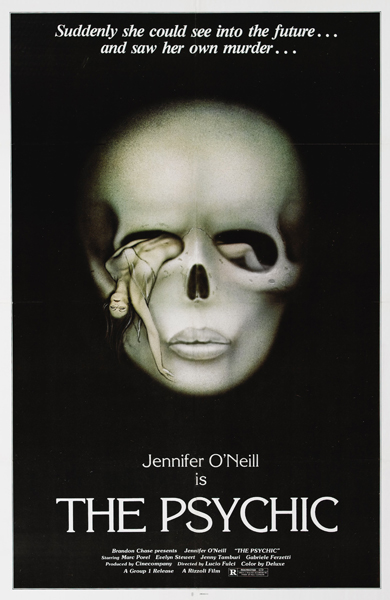 Jennifer O’Neill is the psychic of the title. I mean I don’t believe she identifies as a psychic, she’s just some lady, but one day while driving through some tunnels she freaks out a little and has some visions. It’s nice to go back and see a psychic vision before the invention of Avid farts, because the images don’t cut away as fast and they are not accompanied by whooshing or thudding sound effects. Anyway, she sees a dead body and a bunch of cryptic imagery (a red lamp, a broken mirror, a magazine, a statue on its side, a wall with a section chopped out of it). Then when she moves into her new vacation home she realizes that some of the things she saw were in her home. So the movie is about her premonition coming true and her trying to do the detective work to figure out what she was seeing in her vision and by extension how to solve the murder.

One thing that’s cool about it is that the premonitions are kind of self-fulfilling. It becomes a catch-22 like you’d have in a time travel movie. For example, she sees this wall and figures out that it’s the same one that, in her vision, had a big hole in it. This inspires her to dig the hole out of it to find out what’s inside. Much later she ends up getting stuffed into the hole and bricked up without so much as a cask of amontillado. So if she had just not been paying attention to her psychic visions none of this ever would’ve happened. She would’ve been okay.

The movie is also known as SEVEN NOTES IN BLACK, which is a way better title. Not only does it sound cool but you only realize what it means at the very end of the movie. That doesn’t happen very often. I mean, in BATMAN I figured out why it was called BATMAN pretty early on. Even JURASSIC PARK, I figured that one out before they even got to the island.

I gotta be honest, THE PSYCHIC is a little slow for a guy like me who’s more used to the giallos that involve a masked man or woman going around choppin people up. This is not that kind of movie. There’s a funny trailer included on the DVD that uses the spooky woman-hanging-out-of-a-skull’s-eye-socket poster art and tells you that it’s so scary it’s gonna change your life forever. That might be a bit of an exaggeration. It does work its way to a good ending though. And even if this isn’t one of Fulci’s more violent movies it does have a little bit at the beginning that sort of illustrates how effective cinematic gruesomeness can be. In a prologue the little girl version of The Psychic sees her mom jump off a cliff. We’ve seen that kind of fall in a thousand movies, but this is the only one I can remember where it shows her head banging against the rocks a couple times on the way down. It’s so unexpected and unpleasant that you feel sort of traumatized just like the girl does, you can’t erase that image. You wouldn’t get that with a clean jump.

One reason for THE PSYCHIC’s reputation is Quentin Tarantino. He tried to buy the rights to it when he was doing Rolling Thunder Pictures, but had trouble and sprung for THE BEYOND instead. He showed it at one of his film festivals and supposedly said he was gonna remake it with Bridget Fonda. So maybe we will see that one of these days along with INGLORIOUS BASTARDS, the KILL BILL cartoons, THE VEGA BROTHERS, 40 LASHES LESS ONE, KILL SHOT, the spaghetti western style epic about slavery, the remake of COME DRINK WITH ME, the BAD NEWS BEARS remake, his version of CASINO ROYALE, MODESTY BLAISE starring Natasha Henstridge and his DTV children’s movie RESERVOIR SNOW DOGS. Actually, we might see a few of those but I think he abandoned THE PSYCHIC a long time ago. Instead he took the creepy theme song and used it effectively in KILL BILL VOLUME 1. If you have the soundtrack it’s the one that RZA uses for his poetic ode to O-Ren Ishii.

So if Rolling Thunder couldn’t get the rights to THE PSYCHIC, and Severin Films could, does that mean they could get ROLLING THUNDER too? Because that’s #1 on my must-be-released-on-DVD-list ever since POINT BLANK came out. John Flynn. Paul Schrader. William Devane. Tommy Lee Jones. Severin Films. Digital Versatile Disc. Let’s make this happen, people.

Anyway this PSYCHIC DVD is nice, but not too nice. The print quality is very good, but not one of those ones that’s digitally laquered and polished until you can see your reflection in it. There’s still some grain and some pops here and there and that’s kind of how I like it. The only extras are the trailer and a basic but interesting half hour featurette made up of phone interviews with the co-writer, the editor and the costume designer. (Not sure how the costume designer got on there, but that’s okay.) You sort of learn the history of the project and Fulci is compared to a cruel platoon commander.

If you’re a Fulci completist this is a must-have, because it is by Fulci. I guess that did not need to be said. Sorry. Anyway it’s a pretty good one, I was glad to see it. And if anybody has a problem with that tell it to your mama while she jumps off a cliff and bumps her head against the rocks.

Fulci Jennifer O'Neill
This entry was posted on Tuesday, December 18th, 2007 at 6:04 am and is filed under AICN, Horror, Mystery, Reviews. You can follow any responses to this entry through the RSS 2.0 feed. You can skip to the end and leave a response. Pinging is currently not allowed.