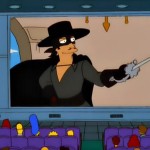 Legend of Zorro is an old fashioned cornball type of movie, just like the first one. It’s all about sword fights and horse chases and the need for California statehood. You got your swashbuckling, your derring-do, your flips, etc. Zorro is the type of guy who will add a flip into any plan whether it’s needed or not. In the opening scene he is chasing an ugly bad guy with wooden teeth, and at one point he does a flip that is actually counter-productive, it causes him to lag behind. But he still catches up. He’s fuckin Zorro, man, what did you think was gonna happen?

This time around Zorro is in a John McClane circa DIE HARD WITH A VENGEANCE stage of his life. He’s drunk, his wife left him, and he got suspended. Actually I made that last part up, I don’t think you can get suspended from being Zorro. But the point is everything’s not strawberries and cream after part 1. You still got some underdog there even after the big happy ending each and every one of us remember so well from 10 years ago or however long it’s been.

Also his happy ending baby is now a grown child so he has to juggle masked heroism with regular fatherhood type business. He’s in almost a Jet Li in MY FATHER IS A HERO situation where his son idolizes Zorro but thinks his dad is a pansy nobleman who goes away too much and doesn’t have the balls to fight for what’s right, which in this place and time is California statehood. Seriously, everybody is really excited about it.

Another thing that sucks for Zorro, his horse is still kind of a dick. Or at least they don’t get along very well. The horse is always fuckin around, drinking beer and burping and stuff. Trying to get cheap laughs. But he takes directions well and he doesn’t mind Zorro jumping onto him from high elevations and I guess it’s hard to replace a horse like that.

Like you would expect from the end of part 1, the wife and kid are very involved in the action this time around. It’s nice to think of Catherine Zeta Jones as Zorro’s woman friend again instead of that lady that married Michael Douglas and is always yapping about cell phones. She’s still good with a sword, also a shovel. And she does some undercover noble woman type business with an asshole who looks exactly like Rufus Sewell, and turns out to actually be Rufus Sewell according to the credits, which explains the resemblance. Anyway that’s the slow part of the movie, for adults.

To keep the kids interested though, the little crumbcrusher gets in on the action. Now, I assumed that when Zorro did all that intensive training with Anthony Hopkins in part 1, that was what made him Zorro. But it turns out some of it might be genetic too, because this little bastard has it in his blood. There is a completely ridiculous scene that I liked where the kid gets in a sword fight with the padre in school. And yes, he does a flip. If he knew his dad was Zorro he would probaly rebel by never doing flips at all. But since he thinks his dad is a sissy he does a flip in class. I don’t think Catherine Zeta Jones ever does a flip though. Come on lady, let’s see some more effort in part 3 thank you very much. Same goes for the horse. No excuses.

I’m not sure what to make of the politics of the movie. I think pretty much anybody could read some kind of symbolism into it to support their world view. The Californians are voting to ratify a constitution, which reminds you of Iraq. And some assholes are trying to steal the votes. (Alot of Zorro’s missions are about stealing or protecting documents.) So you might think the bad guys (who mention Jesus alot but don’t seem all that christlike) are a good symbol for terrorists or insurgents or somebody like that. But even though they’re trying to stop the vote, they are kind of these neocon types trying to control the whole world, and starting a civil war and supplying weapons and whatnot. You could draw alot of different parallels. So I’m not sure what this all says about our modern world but I guess if Zorro ran for congress I might vote for him, I don’t know. I’ll have to think about it.

I don’t think the first Zorro was exactly a pop culture phenomenon, and that was so long ago that it’s weird they made this sequel now. I don’t know where you draw the line between “I admire their temerity making a sequel to that” and “who the fuck wants a sequel to that?” But I for one am happy to see this character and this type of movie again, even if nobody else does. I like this Zorro character. He’s a good character because 1. he’s Zorro so he can pull off any spectacular stunt required of him but 2. he also fucks up real bad sometimes and 3. because he’s Antonio Banderas he’s stubborn about it and it’s funny to watch him get all mad.

I think Banderas is a good action hero, he gets very into it with his voice and with his physicality, and he looks good in a hat. I noticed a couple things about this guy’s movies though. First of all, if you are ever in a Banderas movie, stay the fuck away from church. Somebody’s always getting shot in a church. It happened in this one, it happened in ONCE UPON A TIME IN MEXICO, I think it happened in the first Zorro and in DESPERADO, and didn’t something happen in a church in FEMME FATALE? To be fair, church is often a dangerous place in action movies, just ask Chow Yun Fat. And Nico Toscani from ABOVE THE LAW. Still, having Banderas in a church really makes a shootout more likely. So be careful.

The other thing I noticed was about candles. In the secret Zorro cave, there must be something like 200 lit candles. When does he have the time to light that shit? I hope he doesn’t make Catherine Zeta Jones do it. And he doesn’t have an Alfred. Same thing in DESPERADO, he’s got candles everywhere during the sex scene, in the secret Desperado cave. If it was just once it would be a mystery but since it’s in more than one movie I guess we can assume Banderas spends alot of time lighting candles. That’s just what he does.

A little word of caution. Although Abe Lincoln can be spotted in this movie, he does not have any fight scenes. So don’t get your hopes up. Also, there is a scene where Zorro is locked up in prison by the Pinkertons, the old timey CIA. Thank god the electrode apparently hadn’t been invented yet, there are no Abu Ghraib shenanigans here. Anyway I only bring it up because Zorro’s son breaks him out of jail, which is a good reason to consider having kids. So keep that in mind.

Anyway, like I said, this is just like the first one. Not a rehash, but the exact same tone and pacing. The same kind of action, the same kind of humor, the same kind of melodramatic romance. The one thing they tried to improve was the opening and closing credits. This time the text at the beginning is bigger, so you can read it, and the end credits don’t have a horrible ballad over them. But otherwise it’s the same. If you saw the first one and didn’t like it, move along. This is private Zorro business, you’re not wanted here. The audience I saw it with seemed to really enjoy it, but still, I’m gonna have to guess that alot of people won’t. Because it’s so defiantly corny and old fashioned. There might be one or two minor historical inaccuracies I would guess, and there’s some jokes, and explosions. But there is no attempt to make this any more modern than they did in part 1, and it wasn’t like it was up to date then. For once, there is no way to tell this movie was made after THE MATRIX. If there’s many more digital shots this time around I didn’t notice them (I thought maybe the train but it turns out even that was a model).

Also there’s a part where he throws his hat at a guy like it’s a throwing star.

Antonio Banderas Catherine Zeta-Jones Martin Campbell Nick Chinlund Orci & Kurtzman
This entry was posted on Wednesday, October 26th, 2005 at 8:56 am and is filed under Action, AICN, Reviews. You can follow any responses to this entry through the RSS 2.0 feed. You can skip to the end and leave a response. Pinging is currently not allowed.

One Response to “Vern Claims Zorro Fight Californian Neocon Christian Terrorists in LEGEND OF ZORRO and he digs it!”