It wouldn’t be a holiday weekend without our own Vern digging in with a review of a new Steven Seagal film.

Well, it pains me to admit it guys, but Steven Seagal may be in a small rut here, at least movie-wise. Everyone knows his heart is in playin the blues right now, yet between guitar solos he’s still poppin out 3 movies a year. I’m definitely not counting my man out yet, especially with him directing PRINCE OF PISTOLS still a possibility. But after MERCENARY FOR JUSTICE, SHADOW MAN, ATTACK FORCE and now FLIGHT OF FURY all in a row, I feel like he’s not at his highest potential of achievement right now. Somebody forwarded me his tour rider for some reason (somehow people got the idea I was obsessed with Steven Seagal) and I noticed he’s drinking Red Bull, not his own Steven Seagal Lightning Bolt energy drink. So that might be part of the problem. 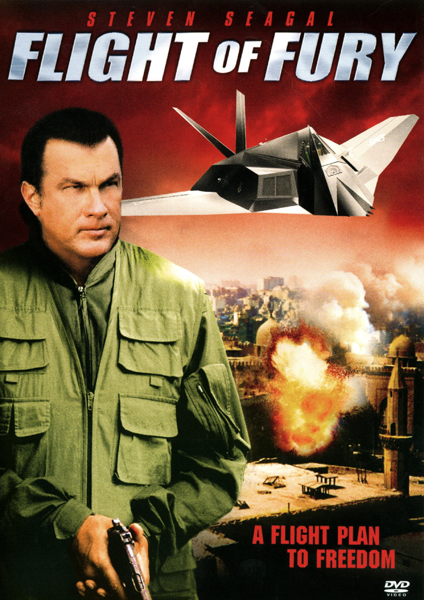 Don’t get me wrong, these movies all have their moments, and they almost always seem a little more interesting the second time I watch them. But most human beings aren’t that dedicated, so I have no choice but to recommend FLIGHT OF FURY (which comes out this Tuesday) only to serious Seagalogists like myself, and then only for educational purposes. This only has traces of the various Seagals we love, such as the badass from OUT FOR JUSTICE, the holy warrior from ON DEADLY GROUND and the crazy weirdo swordsman from BELLY OF THE BEAST, OUT OF REACH, etc.

That said, there are a number of things he mixes up here to keep things fresh. While it starts typically with him escaping some kind of government plot to wipe his mind, we soon find out that he’s the world’s best Stealth pilot. I might have to go through my files but off the top of my head I’m pretty sure we’ve never seen Seagal fly a plane before – the closest we’ve seen was getting sucked out of a plane and plummeting to his apparent death in EXECUTIVE DECISION. Which in my opinion doesn’t count. (He did fly a helicopter in BLACK DAWN though.) Anyway, this is the first time we get to see Seagal in the RIGHT STUFF style slo-mo pilot stroll towards the camera.

Another thing that’s unusual, Seagal’s character doesn’t have a last name here. Everyone calls him John. It’s unusual to go by first names in a military setting, but John is just a likable guy I guess. I was worried that the end credits would give him a last name (IMDb claims he’s “John Sands”), but I was happy to see that the credits just call him John. One name, like Prince, or Vern.

During an off-the-books test flight of an experimental Stealth jet called the X-77, one of John’s former students (and the world’s second best Stealth pilot) steals the jet and sells it to terrorists in Afghanistan. Meanwhile, John is locked up for having a stolen car when he kills a bunch of armed robbers in a gas station. The military gets him out of jail in exchange for going with a young pilot named Jannick and an asset named Lisa to steal back the X-77 before terrorists use it to drop biological weapons. If this sounds familiar to you, you must be a Michael Dudikoff fan, because this is a remake of the 1998 Dudikoff picture BLACK THUNDER. The plot is the same, most of the character names are the same, but for some reason they didn’t credit the original writer (he just gets a special thanks at the end). Apparently he didn’t even know about this movie until he saw it on IMDb.

Anyway, the movie shows early promise with the scene where he happens to be in a gas station mini-mart when it’s getting robbed. In the HARD TO KILL days he used fancy tricks to knock these type of guys unconscious. He broke some bones but he purposely didn’t use his gun. At this age though he straight out executes the motherfuckers. He punches through glass to steal one guy’s gun, then unloads it into him, slides across the floor and shoots 1 or 2 other dudes full of holes. Once he’s out of bullets he faces the last robber, a guy with a switchblade. He puts down his gun and puts up his hands, but then produces his own knife and starts waving it around like it’s a fencing match. He’s clearly using some fancy knife fighting style that will shame whatever crude stab the dude was planning on doing. Then he just throws the knife in the guy’s neck. I loved this scene. At first it made me laugh because it looks so funny and then it impressed me because I realized that it really was a pretty good move. The knife fighting style comes up again later. I hope he’s not leaving his samurai sword phase from INTO THE SUN and OUT OF REACH, but this is a nice one too.

When the cops show up he’s in a room full of bloody corpses, but he tells them in a dubbed voice to watch the security tape. There’s alot of dubbing in this one, not just for Seagal but for a couple of his military superiors too. For this one they chose unusually GODZILLA-esque voices and even one guy that sounds exactly like that scene in THE ADVENTURES OF PEE WEE where he says “paging Mr. Herman.” Most of the dialogue is really plain too, which fits the dubbing style. My favorite attempt at a colorful line is when an admiral or something discusses the biological weapon that might infect the entire world within 48 hours: “This is no naval or air force matter. This is global. The whole damn kit and caboodle.”

One stunt I never seen Seagal do before, he rolls under a truck and holds onto the undercarriage. But then when a security team checks under the truck with mirrors he has somehow reappeared on the roof. That’s some ninja shit. There’s some pretty harsh aikido near the end too, and Seagal uses his trademark gun style where he supports an entire rifle with one fully extended arm, or sticks a gun around a corner and fires without looking.

But of course alot of the action this time is plane related. The X-77, by the way, is special because it has “active stealth” where it turns invisible for a while. Not like Wonder Woman invisible, with a little Seagal floating around, but Predator invisible, so you just see a little glimmer here and there but mostly see nothing. Unfortunately, invisible is not exactly the most cinematic image, especially if all it does is fly. Maybe if an invisible plane could pick up objects and carry them around or drink water or smoke or something, that would be cinematic. But this is just a plane. Who are you fooling, planes? Leave the invisibility to the hollow men.

In some ways the movie seems more competent than the last one, ATTACK FORCE. For example, we know they knew what the plot was before post-production, because it was already available on DVD as BLACK THUNDER. But in other ways you gotta wonder what the hell they were thinking. For example, most of the movie takes place in Afghanistan, but one of the characters is a woman who walks around in a silk bathrobe most of the time. I don’t care if it’s post-Taliban, no woman in Afghanistan is gonna answer the door in a silk bathrobe. Luckily, they are in some part of Afghanistan where everybody is westerners, and she is able to seduce the terrorists’ second in command for a lesbian make out session.

Anyway, we’ll save the more detailed analysis for a more scholarly forum, but let’s just say most people won’t find this one of the better Seagal pictures. If you are new to his DTV works you are better off with BELLY OF THE BEAST, OUT FOR A KILL and OUT OF REACH. In those days I was begging everybody I knew to watch these movies, but with these latest ones it’s just something I do in the privacy of my own home, you can’t push it on anybody. I kind of enjoyed it myself, but you know how I am.

DTV remakes Seagalogy Steven Seagal
This entry was posted on Sunday, February 18th, 2007 at 3:43 pm and is filed under Action, AICN, Reviews, Seagal, Thriller. You can follow any responses to this entry through the RSS 2.0 feed. You can skip to the end and leave a response. Pinging is currently not allowed.