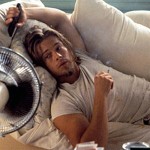 It turns out we’re all connected.

Nah, just fuckin with you. So last year, 2006, some people said was the Year of the Mexican Director because of the so-called Three Amigos, named hopefully not after the Chevy Chase movie but after a half English, half Spanish phrase that literally translates as “Tres Friends”:

AMIGO #1, Alfonso Cuaron, broke through to the V.I.P. Director’s Lounge with CHILDREN OF MEN, which alot of us consider the best or one of the best movies of 2006.

AMIGO #2, Guillermo Del Toro, finally got some respect from the fancypants establishment critics and Oscar voters with arguably his best Blade-less movie to date, PAN’S LABYRINTH.

But it was #3, Alejandro González Iñárritu, who got his new one BABEL somehow nominated for best picture, with some people (comparing it to CRASH because of its multi-cultural ensemble cast, goofy coincidences and themes of different cultures interacting) thinking it’s gonna win. 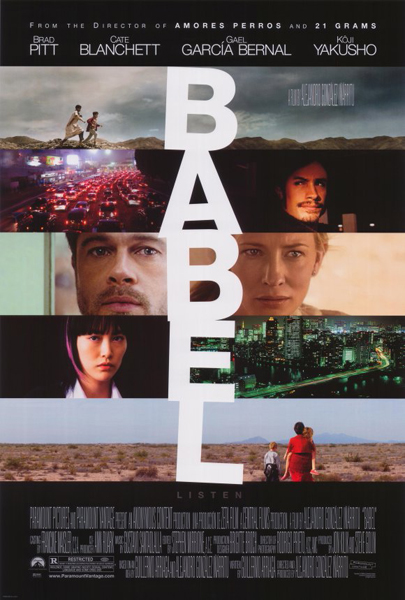 Well, I don’t want to be an asshole, but I gotta say the other dos amigos made better movies this year. Nice try Alejandro, but you ain’t besting the jawdropping continuous handheld shot through war zone or the weird naked monster with no eyes who eats babies. BABEL is a really well made movie, it has some great scenes in it, and all the actors in it are very good. It has basically four different stories:

All of the stories ultimately turn out to be connected. And as far as I can tell the connections all pretty much make sense except for the Japanese one – it turns out the gun was given to a Moroccan guy by the Japanese sex maniac’s father when he was on a hunting trip. This guy’s wife committed suicide so you wonder if maybe he got rid of the gun for that reason, but no – he was on a hunting trip, and he gave it to this dude for being a good guide. Maybe the arbitrariness is kind of the point, but it still kind of feels like cheating.

The Brad Pitt-Cate Blanchett story is kind of hard to watch. When we first meet them they’re arguing about something that’s never fully explained, and Cate seems like a total bitch. Worse than the arguing she is being a pain in the ass to her server at a small outdoor Moroccan food joint, asking what on the menu is nonfat and dumping out Brad’s ice because she thinks the water might be bad. This is a really good way to establish that she is a horrible, obnoxious person who I would never want to be around, and then right after that she gets shot and spends the rest of the movie bleeding almost to death. So you feel bad because you hate her and want her to go away somewhere where you never have to eat food with her, but also you gotta feel bad for her because she’s a human being who has to stare death in the face while she lays in a hut pissing herself. Good times.

The story of their maid is easier to watch – at first. This woman is very likable and of course you gotta feel bad for her because her boss (Brad Pitt) tells her she has to watch the kids even though her son is getting married. It’s not until the end of the movie that you learn that this takes place after Cate has already been shot, so you spend the whole movie thinking Brad Pitt is such an asshole that he decided to stay an extra day in Morocco even though it would cause his maid to miss her son’s wedding.

Anyway, she tries to get someone she can trust to watch the kids but nothing works out, and she decides that the responsible thing to do is bring the kids to the wedding. This is the most joyful part of the movie (well, the only joyful part of the movie) because it’s a beautiful wedding and you get the feeling that the kids are having fun even if they don’t understand what anybody is talking about. This woman practically raised them from birth but they’ve never seen her house before today; now they also get to see her home country, her entire family and her life outside of serving their food and cleaning up their piss.

But I guess it wouldn’t be a story if it didn’t turn out fucking horrible, so on the way back into the country they get totally screwed and she ends up wandering through the desert all night, having to abandon the kids to find help and then getting royally busted by the Man. And this lady is much nicer than Cate so you feel horrible watching her suffer and, again, it’s hard to watch. There’s a pretty moving part where she and the kids have been hiding in the desert all night, waiting for her crazy drunk nephew to maybe come back for them, and one of the kids asks “Why are we hiding when we didn’t do anything wrong?” And it’s true, they didn’t, but you also start to realize, in retrospect, that an undocumented worker probaly would’ve known it might be difficult to bring these two kids across the border. Oh well, that’s the magic of cinema.

The story about the Moroccan kids is really well done, they seem very real and there is some humor here and there but, you know, they just accidentally shot a human being. So it’s not exactly soap box derby races for these kids. Kind of a bad day.

The most fun story is the deaf girl who likes exposing her privates and making passes at respectable adults. But by the end not only is she miserable, but I realize I don’t even understand what the fuck is going on. She lies to a cop about the details of her mother’s suicide, and I’m not really clear why. Then she hugs her dad while naked, this is the closest we get to a happy ending.

Now, I’m obviously not somebody who demands a happy ending to every story, but this is one of those movies that almost seems sadistic in what it puts the audience through without offering any relief. I probaly missed something, but when it ended I wondered why exactly I had to sit through all that horrible misery. What have I gained? I’m not sure. Just a guess, but I bet this guy is the gloomiest of the three amigos. I can imagine them sitting somewhere having lunch and Guillermo is all excited about some monster movie he just saw. Alfonso is interested and asks a question about the cinematography. But Alejandro just pouts, poking at his food, staring blankly at the plate. He mutters,”Who gives a shit anyway, it’s all bullshit. The world is a cruel bitch and she will stick a mop handle up your ass whether you deserve it or not.” Whatever, Alejandro.

Both CHILDREN OF MEN and PAN’S LABYRINTH take place in worlds more cruel and dangerous than BABEL’s. But they each have a ray of hope. PAN’s has the innocent little girl, who we obviously root for and relate to, and her fairy friends. They face horrible real life monsters, and the ending is just as fucked up as it is happy, if you think about it. But there is that heart at the center, you know what side you’re on and what you’re fighting against, and you like to see the ending as happy even if part of you knows it’s not. CHILDREN OF MEN, because of the way it’s shot, forces you to identify with Clive Owen, and eventually leads you to hope for the future. The whole movie is about finding hope.

BABEL, I’m not so sure. I’m sure some people would find something deep in these clashes between languages and cultures, but I don’t know. I don’t feel like I learned anything new and I’m pretty sure I didn’t enjoy myself.

I had heard this notion that BABEL was a smarter version of what the oscar voters liked about CRASH. After seeing it though I really don’t think it’s gonna win because it leaves you feeling like shit. CRASH, to the people who liked it, made you feel good about yourself because you can be redeemed, you can fall on your ass like Sandra Bullock and be cured of racism. here, all you can do is hug your daughter because everything is fucked up and even then you gotta feel kind of uncomfortable because she’s totally naked and you’re out on the balcony and somebody could get the wrong idea. And you’d have to explain no man, everybody is connected.

Anyway, I’ll have to catch up with this guys earlier movies, which I’m sure are better. He’s my least favorite of the amigos but he’s obviously got talent, you can see why they’d let him sit at their lunch table. As long as he cools it with all the doom and gloom.

Brad Pitt
This entry was posted on Thursday, February 22nd, 2007 at 6:57 pm and is filed under Drama, Reviews. You can follow any responses to this entry through the RSS 2.0 feed. You can skip to the end and leave a response. Pinging is currently not allowed.