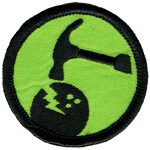 Remember when that jackass Geraldo opened up Al Capone’s vault on live tv, and there was nothing inside? I know he remembers, people probaly give him shit about that four times a day. Well, most of us are smart enough to check inside the vault before we go live on tv, but the truth is that most of our big discoveries turn out to be a bust. I mean, if it was easy to find gold it wouldn’t be gold, would it?

I only bring this up because when I discovered this little known ’80s blaxploitation/karate dude from Indianapolis named Ivan Rogers, and especially when I found his movie BALLBUSTER, I figured I had pretty much just opened Al Capone’s vault and found Jimmy Hoffa and Amelia Eirhart’s skeletons inside holding hands. I mean the title alone is a treasure, but you read the back of the box, one of those way-too-detailed synopsises you find on some real low budget movies, and you gotta get excited: Ivan Rogers plays a P.I. named Roosevelt “Ballbuster” Prophet. I repeat, his name is Roosevelt “Ballbuster” Prophet. Two of the villains he fights are called Hacksaw and Paycheck. Later he fights mercenaries called “The Nasty Boys.” (I’m not sure if they said this in the movie, so I’m glad it’s mentioned on the box.) 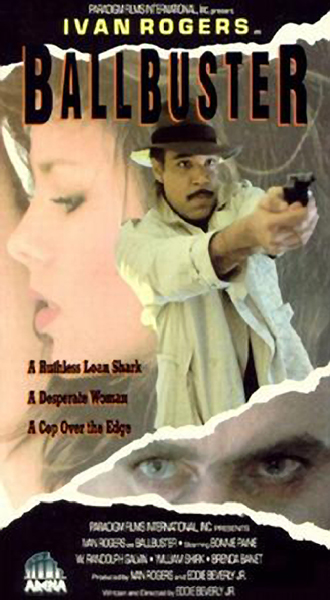 This story is about him taking a case from a famous artist woman. At the beginning we see her painting, and her painting is really bad. Later we see her painting again, and she keeps smoking and drinking scotch, so you know she’s troubled. (In CRAZED COP they just used scotch to signify inner turmoil, now they added cigarettes.)
There are a couple unique touches here and there. I was impressed that they state explicitly that Ballbuster Doesn’t Play By The Rules. At the end, when the bad guy has the girl hostage, Ballbuster won’t hand over his weapon because he figures he’ll still kill her. “Either way 2 or 3 of us are gonna die, and it ain’t gonna be me.” The bad guy says “You’re crazy!” and Ballbuster says, “No, I just don’t play by the rules.”

This was important to point out because, personally, I was thinking that he played by his own rules, but actually he doesn’t play by any rules. I’m glad they make that clear.

And you know how at the end of this type of movie the bad guy gets shot, and they turn and start to walk away and you yell at them because you know the guy is gonna come back to life and try to shoot them? In this movie, Ballbuster is very aware of that. He turns his back on the apparently dead bad guy. When the girl starts to say something he holds his hand out to silence her. He is listening for the click of the hammer, then he turns around and shoots the guy dead. Self defense. Well played, Ballbuster.

But my favorite thing in this movie other than the title, this may seem insignificant to most people, I don’t think most people would blink an eye at this particular scene, but hear me out. There’s a part where Ballbuster goes to the girl’s house and she doesn’t answer the door right away, and when he complains that he was knocking forever she says it’s because she was washing her shoes. She’s not lying, and this is not important to the plot. It just happened that she didn’t answer the door right away because she was washing her shoes.

See, that’s the type of thing Hollywood tries to gloss over. They want you to think that everybody wears brand new shoes every day. But not in an Ivan Rogers picture. In an Ivan Rogers picture people gotta wash their shoes. Just like reality. Some people don’t want to face it, but it’s the truth. Wash your shoes.

Of the two Ivan Rogers pictures I’ve seen, BALLBUSTER was the most entertaining, so keep that in mind.

Ivan Rogers
This entry was posted on Monday, February 12th, 2007 at 9:34 pm and is filed under Action, Crime, Reviews. You can follow any responses to this entry through the RSS 2.0 feed. You can skip to the end and leave a response. Pinging is currently not allowed.