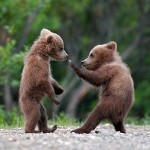 Oyama takes the job with the gangster, which is a great chance for him to wear shades, a white suit and a long white coat over his shoulder, and scare everybody without saying a word. 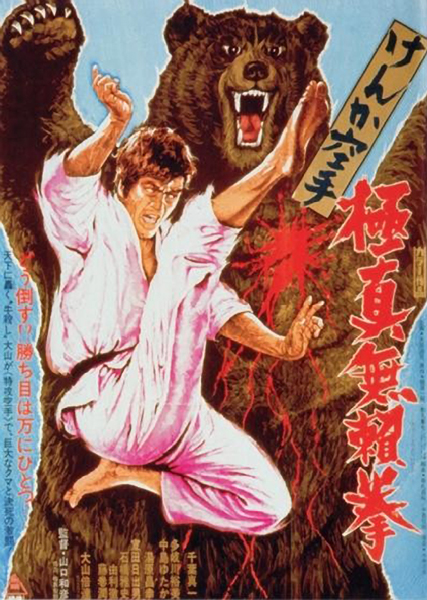 The plot has a kind of episodic feel to it that makes him seem more like a Lone Wolf and Cub type of character, a badass that travels around helping people and getting into scuffles. First he runs into a street hustler pretending to be him – Oyama, world famous karate master – to sell homeopathic fitness aids. This pisses him off and he humiliates the dude. But the hustler buys him a drink as an apology and, getting a glimpse into the guy’s life, he grows sort of fond of him. The guy is engaged to a waitress who believes he’s the real Oyama, and that especially touches him. (But not enough for him to intervene when the imposter has to fight a bunch of karate masters because everyone thinks he can take them.)

But then the waitress gets killed by an asshole gangster, and when her imposter fiancee tries to get revenge, he gets killed too. Now the story takes a completely different direction as Oyama travels to the countryside to bury the couple’s urns at the foot of a mountain. I thought he was gonna meet up with that kid whose father he killed in the first one but instead he gets a different surrogate nephew. The son of an abusive alcoholic, this kid steals Oyama’s bag, not knowing it has urns in it. Following the kid to his house, Oyama discovers the deadbeat dad mistreating his son and almost beats him up. But when he sees the kid’s love for even such an asshole of a father, he gets all soft.

So they become buddies and go fishing together, and the father straightens up a little and gets a job cutting down trees. And then he gets injured on the job, which is where the bear comes in. In the first one, Oyama fought a bull because it was loose and on a rampage. I was expecting a “How can the same shit happen to the same guy twice?” type of scenario with the bear but instead they make it plausible, everybody’s heard about Oyama’s bullfight so they pay him to fight a bear, and he needs the money to help the injured dad.

The bearfight is the one aspect that I thought was inferior to the original. It’s clearly a dude in a bear suit, even if they hide him behind branches constantly. There is never a real bear on screen. And still the moves Oyama does don’t seem that deadly. The bullfight was much better.

What makes these movies so much fun is a good balance of story and asskicking. I really like these characters and want things to turn out well for them. And there are some sad parts in this one that are real effective. But then it’s always exciting when a fight breaks out. Oyama is the kind of guy who can just be walking down the street and suddenly a bunch of dudes will jump out and announce they are going to kill him. His karate rivals are not very professional about their disagreements, in my opinion. Also, for some reason both movies have a scene where he has to fight a tall African-American soldier.

There aren’t any moves as original as the rock throwing in part 1, but there’s a good eyepoking for you. Also the first fight has a very modern and flashy technique where it cuts to a shot of an x-ray to show that he’s breaking a guy’s bone.

All around, one of the best bear fighting movies you will see, even if the bear fight is the low point.

karate Sonny Chiba
This entry was posted on Monday, June 26th, 2006 at 10:25 pm and is filed under Action, Martial Arts, Reviews. You can follow any responses to this entry through the RSS 2.0 feed. You can skip to the end and leave a response. Pinging is currently not allowed.