Vern sees into A SCANNER DARKLY… what did he see?

Ahoy, squirts! Quint here with our main man, Vern, who got an early look at Richard Linklater’s newest, A SCANNER DARKLY. My words are meaningless when the great Vern speaketh below. Enjoy!

A SCANNER DARKLY, Richard (BAD NEWS BEARS) Linklater’s new adaptation of the Philip K. Dick novel, is a visionary and boldly stylized look at the tragedies of the drug culture and the growing police state. Its psychedelic style of wobbly, traced-over animation creates a fluid, disconnected reality that perfectly captures–

Ah fuck, who am I fooling. This movie put me to fuckin sleep.

Maybe it’s over my head, I won’t rule that out. And I don’t want to say it’s necessarily a terrible movie (like WAKING LIFE – I hate that god damn movie). I haven’t read the book, and maybe people who did will enjoy it. Who knows. I think I admire what the movie is going for but that doesn’t change the fact that, to me anyway, it’s a meandering bore with barely any characters, humor or even plot to latch onto. 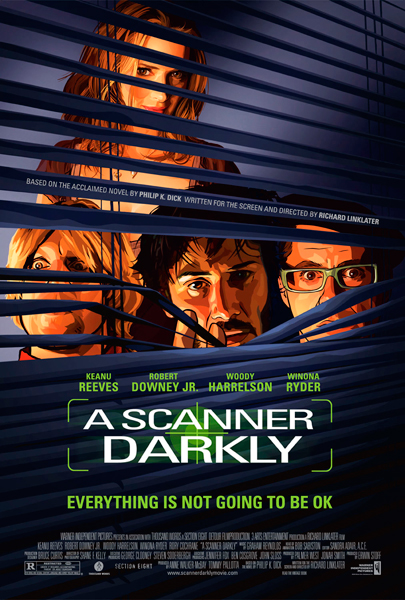 Keanu Reeves plays a narc who goes undercover with a bunch of hippies using a drug called “Substance D.” But he truly is addicted to the drug so also is undercover among the cops. Because it’s 7 years in the future he wears a “scramble suit” to hide his identity when talking to other cops. This is a suit that causes every part of his face and clothes to constantly morph into different identities (Michael Jackson’s “Black Or White” video on acid) and is probaly the most clever use of the animation (even if the gimmick gets old fast). The movie takes place in a surveillance-obsessed future where everything everybody does gets holographically recorded and then his job as a “scanner” is to go through the footage on fast forward. (It is not related to SCANNERS or SCANNER COP.) Because his drug use causes damage to his brain he begins to spy on himself without realizing that it’s himself (or at least that’s what I gather after reading up on the book afterwards.)

That’s sort of what it’s about but unfortunately that’s not what you’re watching for most of the movie. Mostly you’re watching Robert Downey Jr. and Woody from Cheers laying around in an apartment or sitting in a diner pretending to be real high and getting confused about stuff. Also Winona Ryder is there and some other guy who acts like Renfield from Dracula to show how high he is, proving conclusively that drawings can overact. Sometimes I thought he was trying to be Benicio del Toro in FEAR AND LOATHING IN LAS VEGAS and that’s helpful because it makes it easier to figure out what is wrong with the movie. As much as they’re marketing it as sci-fi, this is not about robots and lasers, it’s more of a drug movie. Like FEAR AND LOATHING it is intentionally disorienting and kind of puts the viewer in a drug state. But in F&L, you have two undeniably compelling lead characters with strong personalities. You have lots of hilariously insane conversations and nightmarish drug freakouts (the lizard people is the famous one but my favorite is the bath tub suicide/grapefruit tossing scene). And there are other characters and a great setting to play off of. And when it comes around to having insights about the world of the 1970s, it seems earned and insightful and relevant to today. SCANNER DARKLY is weak or absent in all those departments.

Especially the dialogue. When you’re making a movie that’s more about people talking than about any kind of plot, they should probaly be talking about something interesting. If this shit is lifted straight from the novel then I apologize, but at least as presented here it’s a fucking bore. The closest thing to an interesting conversation is when they study a bicycle and debate how many gears it has. They speak third rate mystical drug nonsense, not nearly as pretentious as all that college dorm dream bullshit in WAKING LIFE, but even more meaningless.

And then there’s the characters. I don’t got a problem with Keanu. He’s Neo, for chrissakes. But I don’t know what his personality is in this movie, other than confused. And they definitely give the guy some soliloquy type dialogue that his mouth can’t handle. Then you got Winona. She is no more likable than any of the rest of these characters, possibly less. And it’s only in retrospect that I realize she is supposed to be the love interest who is driving the story. I’m not sure what Keanu sees in her but maybe if I knew what Keanu was about I would.

Most disappointing is Woody, because I actually like that guy. Remember Larry Flynt? KINGPIN? Even NATURAL BORN KILLERS – I didn’t like the movie, but he was good in it. So I was ready to enjoy his performance. Finally they tear him away from riding around on a hemp bicycle to do another movie but they only let him be mildly amusing. To be fair, the packed screening I saw the movie with laughed at a lot of the mildly wacky drug antics throughout the movie, but I didn’t get one laugh out of it.

I guess it’s nice to see Winona Ryder in a movie again, she used to be pretty good. And if you’ve always dreamed of seeing a drawing of her boobs, here is your movie. Please note though, there is not a tentacle going up her coochie like in some of your other “adult oriented” type cartoons you weirdos jerk off to.

That’s right, this is a type of cartoon so I should probaly analyze the cartoonsmanship a little bit. The last cartoon I saw was ICE AGE PART 2 on a plane and I would have to say that I liked this better than ICE AGE PART 2. They are equally boring and laugh-free but this one didn’t have jokes about animals shitting, which makes it stand out as a unique use of animation. I guess it’s the same as WAKING LIFE, I have to acknowledge that it is an original use of the particular medium, and that’s a good thing. We need more people trying new things. But that doesn’t necessarily mean it works.

Why isn’t this movie live action? I guess because it’s a drug movie and there are some weird visions here and there. Maybe you’ve seen the guy with the eyes all over his head, and there’s bugs crawling on a guy at the beginning. Those are the cool parts. Other than that it’s mostly just regular boring suburban places and people. Because the visually imaginative stuff is such a small part of the movie it seems like kind of a waste of time for animators. But I think maybe I know what they were going for. In live action, those parts would be a computer effect that would stand out from the rest of the movie. But this way everything has the same level of reality, and even ordinary everyday things likes couches and pet dogs are a little wobbly and gooey and make you seasick. That sort of works so I’ll give it a pass.

Also I guess it adds production value because without the tracing over this would mostly be camcorder shots of famous actors pretending to be high in some dude’s living room.

But another good question is, why is it traced over live action instead of a real cartoon? I’m sure tracing over is a gigantic pain in the ass, but it’s not as effective as a cartoon. You’re always aware that it’s real footage that somebody traced over so it distances you. In a real cartoon, some animator is creating life out of drawings. Here, they’re chasing after life and trying to draw lines over it. In small doses it’s kind of a novelty to see people who look like they’re made out of jelly, but I’m not convinced it’s a good way to tell a story. And the way they shade their faces makes it look like a cheesy photoshop filter.

Nope, I didn’t like this movie. But I don’t want it to feel all bad about itself and spiral into drug addiction, so I’ll end by saying 5 (five) nice things about it:

Number one, a movie doesn’t carry full responsibility for putting a person to sleep. Other physical factors are involved such as fatigue, diet, etc. and maybe you wouldn’t have fallen asleep under different circumstances. You would’ve just been really fuckin bored and twiddling your thumbs while a drawing of Robert Downey Jr. tries to freak you out with how crazy and high he is.

Number 2, there’s occasionally some good stylistic flourishes. I like the way Linklater presents some of it as surveillance footage. There’s even a montage that’s sped up and has fast forward lines on it. That was cool although I’m not sure why holographic video fast forwards the same as VHS.

Number 3, it is probaly more intelligent than other animation related movies it will be competing against, such as GARFIELD PART 2 and etc.

Number 5, as dull as the nonsensical conversations are, at least they didn’t make me squirm and cringe like WAKING LIFE. And THANK THE LORD JESUS CHRIST IN HEAVEN that that Timothy “Speed 2” Levitch guy isn’t in this one. I honestly would’ve walked out. “Coauthoring a giant Dostoevsky novel starring clowns” my ass.

Philip K. Dick Richard Linklater
This entry was posted on Sunday, June 18th, 2006 at 8:35 pm and is filed under AICN, Cartoons and Shit, Reviews, Science Fiction and Space Shit. You can follow any responses to this entry through the RSS 2.0 feed. You can skip to the end and leave a response. Pinging is currently not allowed.