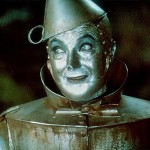 What this one is about is robots. It’s a movie about robots, so they called it ROBOTS. You see how that works? Movie is about robots = title is ROBOTS. That is the level of imagination and innovation we are working with here in America circa 2005. Ain’t life beautiful.

Before I go on, I gotta warn everybody, just because a movie is in IMAX doesn’t mean it’s in 3-D. I saw GHOSTS OF THE ABYSS and POLAR EXPRESS there and the 3-D made those worthwhile, and I swear on THE PASSION OF THE CHRIST: RENAILED that is the one and only reason why I went to see this ROBOTS. Now obviously I would prefer if a 3-D movie was a horror or a part 3, something where either a shark or an eyeball is gonna pop out of the screen at some time. But I have accepted that now 3-D is for kids movies only so a man’s gotta settle. I didn’t mind payin my ten bucks but then when I walked into the theater and there was no goggles, I realized that I was finally suffering the consequences of my ignorance about Imax. I knew this day would come. ROBOTS is not in 3-D. Sheeit. 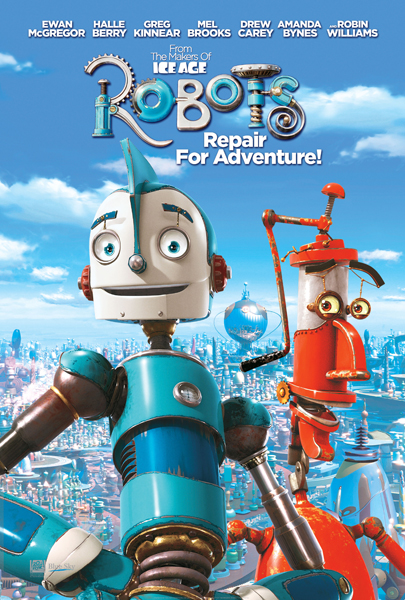 ROBOTS is a computer animated one about a world where everybody is robots. They have dreams, goals, etc., and you could see where it would go from there.

I mean seriously, every single god damned thing that happens in this movie, you would already figure would happen in this movie. Except maybe the character who has a giant ass who farts all the time, I didn’t see that one coming. Farting robots in this one.

A cartoon rabbit’s mom once said if you can’t say something nice, shut the fuck up you thumpery little piece of shit cartoon rabbit (paraphrased) so I will start by saying two nice things. Number one, the designers of this movie are very clever and creative, building an entire world and population out of junk parts. Number two, there is about three or four mildly amusing jokes spaced out throughout this movie. One detail I liked, the villain listens to Kenny G in one part. Somebody should steal that for real live action, that’s a good one.

What you got here though, a bunch of celebrity voices playing “characters” such as Ewan McGregor as Hero Robot, Halle Berry as Hot Girl Robot, somebody else as Kid Sister Robot. Then there is dad robot, mom robot, wise old inventor robot (Mel Brooks), Lovable Flying Pet-like Robot, and Miscellaneous Robot “Characters”. The main problem with this movie, every single god damn element of it except the design comes straight out of the How To Make Boring Generic Kiddie Fluff handbook.

Hero Robot (who probaly has a name, but who gives a shit? not anybody who didn’t get paid to work on this, that’s who) has no personality quirks. He is a mathematical formula. The formula goes like this: boy robot + dream to become inventor = let’s try to stretch this out to feature length if possible. When he’s a little boy he sees a tv show that makes him want to invent. So he invents a thing, then tries to meet the guy from the TV show. But Villain Robot has replaced the tv guy. So for the rest of the movie he has to run around saying things about following your dreams and going for it and now is your time to shine and that type of bullshit. And to stop an evil plot by Evil Robot and his mom. That’s all he ever does. There is nobody in the world, no adult, child or animal, who has any amount of feeling for this stupid character. He is a complete blank. He is nothing.

That was enough to sink the movie but just in case, they also threw in Robin Williams as Wacky Robot. What he does is wacky stuff. He jumps around and says his lines in different accents, makes references to anime, etc. I think we all can agree, that stupid motherfucker is not funny. What is he doing polluting our children’s minds with that crap. There is alot of time during this movie for you to let your mind wander, and one of the things I started to wonder about: if Robin Williams was born now, would his parents put him on ritalin or something? It would suck to lose POPEYE but it might be worth it to avoid more incidents like Wacky Robot and Various Award Shows.

Another thing, I heard there’s gonna be an unauthorized TV movie coming up about the making of MORK AND MINDY. And they deal with his drug problems and he has some big emotional moments. Or at least, the guy playing Robin Williams does. I was thinking, wouldn’t it be great if they have a big emotional breakdown scene where he realizes he’s hit rock bottom and he’s admitting his drug problem, and he’s crying and all, and then all the sudden he starts to get self conscious so he starts mugging, riffing off of it, making references to Reaganomics and E.T. and Rubik’s cube and crap. And it’s so pathetic and embarassing that it makes the scene just completely devastating. This might be the greatest tv movie of all time, if they get the brilliant actor that could pull that off.

Anyway, I value your time, so I’ll wrap this up in three (3) more paragraphs. Some of you might be saying Vern, this is a kid’s movie, who the fuck cares. Well I’ll tell you who cares, I do. Because if I have a commitment to excellence then America should have a commitment to excellence, and by extension Hollywood should have a commitment to excellence and to sharing excellence with the children. They are spending millions of dollars and all these people are working so hard on it, and this is what they make? The Pixar guys wouldn’t do that. They know that it’s about creating strong characters with personality and telling compelling stories about them. Not just saying “it’s about robots!” and stacking up 250 half assed ideas about what robots do in robotland. “Ooh! Ooh! What if they have to go through a metal detector? But they’re all made out of metal! Ha ha ha, it’s funny because robots are metal!”

Let’s not have another one of these, please. Yes, Pixar made one about a world of toys, and a world of bugs, and a world of fish, and a world of monsters. But they made good characters and stories for most of those. They didn’t just leave it at the world. The way things are going, I bet they really will do my idea first introduced in the OSMOSIS JONES review I believe, about a world of laundry where a sock is searching for his lost twin brother. It’s called LAUNDRY. Because it’s about laundry. The one sock, he always believes in following his dream, but then there is a setback and he almost gives up, but his loyal pair of panties girlfriend reminds him of how he taught her to be confident even though she is not lacey and has a regular ass covering area instead of a thong (the thong panties are the popular girls in school, isn’t that clever, it’s a world of laundry). And so he realizes that he should always follow his dream and he goes out there and finds his sock brother, hooray for everybody and then they dance and get folded which to laundry is a really big deal like getting married or knighted or something.

The only problem with LAUNDRY, and also a problem with ROBOTS. Some kids are gonna see it when they’re real little and they’re gonna like it, because they don’t know any better. But then when they’re older they want to recapture that magic, they rent the movie and they can’t even sit through the god damn thing it’s so bland. That is a sad state of affairs not as much in LAUNDRY as in ROBOTS. Because everybody knows robots are cool. They shoot lasers, they crush stuff, they go inside a building after a stand-off to find out if the snipers hit the gunman or not. So this movie should be alot better in my opinion.

robots
This entry was posted on Friday, March 11th, 2005 at 10:58 am and is filed under Cartoons and Shit, Family, Reviews. You can follow any responses to this entry through the RSS 2.0 feed. You can skip to the end and leave a response. Pinging is currently not allowed.