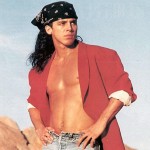 Hey, everyone. ”Moriarty” here. This is the best possible thing for Vern to end up reviewing for us… crazy obscure video titles. And I love the guys over at Dark Sky, so it’s a match made in heaven. Today’s review just proves my point…

So this Dark Sky label has been sending me their DVDs ever since I reviewed their great TEXAS CHAIN SAW MASSACRE ULTIMATE EDITION. Most of them aren’t classics like that, they’re obscure little things I never heard of, and they can be pretty interesting. This month’s titles are TRAGIC CEREMONY and RICCO THE MEAN MACHINE.

TRAGIC CEREMONY is a 1972 Italian horror movie about a TRAGIC CEREMONY. A group of young people go boating, then driving around in a dune buggy, they run out of gas and end up having to go up to a mansion to ask for help. Little do they know there’s a TRAGIC CEREMONY that’s gonna happen there. See, there’s a satanic cult, and one character has this pearl necklace that has a spooky past, and who knows what kind of crazy shit will go down?

Well, I know. I saw the movie. Some heads get chopped off, a guy gets thrown out a window, etc.

I like the feel of the movie but it’s pretty slow, and let’s be honest, satanic cults are obsolete as a source of horror. Yeah, there was that time in the ’80s when Geraldo did a special and it seemed like at any moment you could find some satanists sacrificing bunnies in the woods by your house. But as soon as Anton Lavey and those type of dudes started actually appearing on talk shows it was all over. Those guys aren’t scary, they’re hilarious. Who’s gonna be afraid of a guy in a cape? Come on.

Luckily, as soon as the TRAGIC CEREMONY is over the movie gets more interesting. It suddenly and unexpectedly gets gory, the young people flee and since one of them left his guitar it’s suspected that a Charles Manson type hippie cult was responsible for the TRAGIC CEREMONY. But they don’t really have to prove their innocence because they seem to be kind of cursed and one–by–one meet gruesome fates.

I’m not saying the movie is great, but you will at least be impressed by this very realistic head that gets a sword chopped into it. The effects were done by that guy Carlo Rambaldi, and they’re pretty great. You can tell they were proud of that sword-to-the-head thing because they replay it about 7 or 8 times at the end.

The end of the movie is a real bummer though. It seems like a nice mysterious and unexplained occurrence, but then some dude comes out and explains what he thinks happened. It’s like PSYCHO but even more ridiculous because he’s explaining supernatural things, not psychological. Oh well.

To be honest the thing that got me to watch the movie was Camille Keaton. She’s Buster Keaton’s grand-niece, and she was in WHATEVER HAPPENED TO SOLANGE?, but I know her mainly as “This woman has just cut, chopped, broken and burned five [actually, four] men beyond recognition… but no jury in America would ever convict her!” from I SPIT ON YOUR GRAVE. She’s pretty good and doesn’t have to get raped in this one. The DVD also has an interview with her, about 12 minutes long. She talks about her career in European movies while sitting in front of two I SPIT ON YOUR GRAVE posters. She doesn’t go into detail about that movie, but does seem to remember it fondly. She points out some similarities between that one and TRAGIC CEREMONY.

I was more impressed by the 1973 crime thriller RICCO THE MEAN MACHINE starring Christopher Mitchum as a young guy who gets out of prison, his dad has been killed by the mafia, and after some shenanigans he decides to exact revenge.

Yes, Christopher Mitchum is Robert Mitchum’s son. In the movie though he doesn’t look like his dad or have his kind of presence. He kind of looks like if after HAROLD AND MAUDE Bud Cort had a growth spurt and decided he was tough. I guess you could argue that Ricco is kind of tough, because he does karate on a bunch of dudes, and later shoots some guys and throws some guys off a bridge. But he’s just a lanky kid with a mop top and a red turtleneck. On the cover he’s painted as a bad motherfucker, and it does seem like people in the movie see him that way. He has two beautiful girlfriends (Barbara Bouchet and Malisa Longo) and they don’t seem to care that he gets around.

The movie has gone by many titles, RICCO and THE MEAN MACHINE being two of them. I can understand why they combined them for this DVD, because it sounds pretty cool. And it’s definitely better than the title used on the trailer included on the DVD, which is SOME GUY WITH A STRANGE FACE IS LOOKING FOR YOU TO KILL YOU. That one just doesn’t roll off the tongue, in my opinion.

But the truth is Ricco is not that much of a mean machine. In fact, the other guys in the movie are way more mean. They beat guys and throw them into acid. They kill Ricco’s entire family, including his mom, who’s in a wheelchair. They kill his girlfriend and send her back to him as bars of soap, saying they’ve returned what belongs to him. Also, they cut a guy’s dick off and stuff it into his mouth and then toss him into acid. It’s not just mean to him but to the audience because they show it and it looks pretty real.

So compared to them Ricco is not a mean machine, he’s actually a pretty laid back machine. Though he does beat a guy’s face in with the butt of a rifle. And shoot a guy in the ass. And smile about it. But still, he never cuts anything off of a guy nor does he shove that thing into the guy’s mouth, and if he did it would probaly not be the guy’s dick. You’d have to be a real asshole machine to do something like that.

That’s definitely the highlight of the movie though. When I started watching the movie I was not thinking “this seems like one of those movies where they cut a guy’s dick off and shove it in his mouth and then toss him into acid.” If I had to bet one way or the other I would’ve bet that the movie would not have gone that way. But I would’ve been wrong.

But if you are not into graphic violence there is some beauty in the movie. Both of Ricco’s girlfriends get naked. Bouchet has a really funny scene where she suddenly appears in the middle of a foggy road and does a strip tease on the hood of some mob guys’ car to lure them out, at which point they get tossed off the bridge. It’s a pretty goofy movie.

The DVD includes an interview with Mitchum, giving some background on his acting and martial arts. And now he does kind of look like Robert Mitchum. Still doesn’t look like a very mean machine, though.

Riccardo Freda Tulio Demicheli
This entry was posted on Tuesday, January 29th, 2008 at 4:01 am and is filed under AICN, Horror, Reviews. You can follow any responses to this entry through the RSS 2.0 feed. You can skip to the end and leave a response. Pinging is currently not allowed.