Limp Biscuit singer Fred Durst, who makes his directorial debut with THE LONGSHOTS, turns out to be a natural born director. I was surprised when I read somewhere that David Fincher was mentoring ol’ soul patch, bringing him on the set of ZODIAC and showing him the ropes. I think Durst almost took over for Fincher on LORDS OF DOGTOWN before Catherine Hardwicke did. There were a bunch of false starts but now that he’s finally made one it’s clear that the man has some serious directational chops, it seems he was born to direct movies. Let me be very clear, this is what Fred Durst was put on the planet for. This much is certain now.

Now that I’ve said that I’m just gonna talk about what the plot is and stuff, things that Fred Durst already knows, so if he is reading this he can stop now.

Ice Cube plays Curtis Plummer, the un-employed brother of the loser deadbeat dad of a shy, unpopular high school girl named Jasmine Plummer (Keke Palmer). Jasmine’s mom is worried about her so she pays Curtis five dollars an hour to hang out with Jasmine after school. Curtis makes no effort to make it fun, doesn’t even bother to make her dinner the first time. She doesn’t like him hanging around and tries to run away. 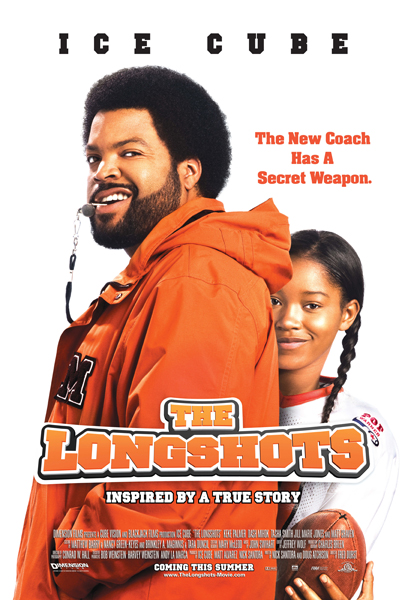 But then one day Curtis gets her to throw a football. Much to everyone’s surprise she Okay, do you think Fred Durst has left yet? I hope so. Okay guys, I apologize for lying to you. Fred Durst is not a great director. Not that he’s terrible or anything, but this is not a very good movie. But I think Fincher was on to something with this “teach Fred Durst how to direct” scheme. Movies take a long time to make, like about a year. And that’s only the ones that get made, some directors spend years on movies that never even start filming. Fincher knows that more than anybody. That’s why he knew that by tricking Fred Durst into thinking he was a movie director, the world would be spared his unique brand of backwards hat rap rock. The more time he’s concentrating on setting up shots the less time he’s jumping up and down screaming “YO! YO! YO!” while some assholes go wocka wocka wocka on their guitars. This is an important service to America’s airwaves. I’m sure Fincher probaly did it for selfish reasons – no way he could’ve finished BENJAMIN BUTTON if he had to worry about a new Limp Biscuit song playing on the radio – but to my mind he is still a hero.

So anyway, she’s good at football, her uncle convinces her to try out for the team, etc. The team is so bad that they sort of have to admit she’s good and let her be the quarterback, even though they are afraid of cooties. She ends up inspiring the team into victory and they make it to the Pop Warner Super Bowl in Miami, Florida.

This is based on a real girl, really named Jasmine Plummer, who really did play football and lead her team to the Super Bowl. The rest is probaly made up. But the best part of the movie is Ice Cube as her uncle. Ice Cube has gotten alot of well-deserved shit for switching over to all these garbagey movies like ARE WE THERE YET? when he was once an iconic gangster rap pioneer and promising new actor. This doesn’t exactly restore his respectable status, because he produced the movie and apparently didn’t notice how weak the script was. But it is a great role for him and he does it well. He’s a simple guy who only dreamed of playing football, but then was injured, so all he knew how to do was work at a factory. And then the factory closed down.

So now he’s the apathetic guy who shows no interest in anything except the box of money he’s saving to get the hell out of this town, who rarely speaks in more than a mumble. Once his niece is on the team he finally has something to be passionate about: yelling at the coach to put her in. Helping teach her to play sort of brings him back to life. And you will not be that surprised when out of the blue the coach has a heart attack and Uncle Curtis takes over as coach. If that does happen. I won’t give it away. Maybe it does, maybe it doesn’t.

A s a fan of Ice Cube it’s great to see him playing a different type of character. And Keke Palmer is very likable as Jasmine. The photography is nice. Also, the basic emotions of the story are hard not to fall for a little. It reminds me alot of watching GRIDIRON GANG. The Rock is charismatic as usual, the story tugs the heartstrings a little, and not a single moment does not feel like the most generic thing you ever saw a thousand times in your life. Both are based on true stories but come across like they could’ve been invented by the marketing team at Walt Disney Pictures.

I think you can take a story like this and make it work better than this if you can make it feel real. And Ice Cube does his damndest, but it’s got pretty bad dialogue and lots of generic character types (the school bullies, the wacky comic relief dudes) that don’t really earn your trust as viewers. I’m prepared to be moved by the meanest girl at school redeeming herself by apologizing to Jasmine, but when it just happens out of the blue with no build I’m not sure what to take out of that.

The worst aspect of the movie by far is the score, which is absolutely inexcusably horrible, pretty much the worst possible. By that I don’t mean it’s a guy sitting on a keyboard and blowing a kazoo, it’s a very professional orchestral score that makes every moment seem phony by layering it on thick like a condescending car salesman. Listen up composer Teddy Castellucci: I don’t need some prick who scored HOME ALONE 4 and WHITE CHICKS telling me what emotions I’m supposed to feel. The more you try to tell me how triumphant this is the less I believe you. If this entire score was removed and set on fire the movie would be alot better. It could use a much simpler or more soulful score, maybe some twangy guitar, or some more Ray Charles like the opening scene, something. But even no music at all would make the movie play way better than it does with this shit on here. Teddy Castellucci, you are a liar and a scoundrel. You have disgraced the legacy of N.W.A. and stained the city of Compton forever. Haven’t you ever witnessed the strength of street knowledge? Clearly you haven’t.

What a surprise, by the way, that the guy from Limp Biscuit would be terrible at using music in his movies. I gotta say man I am truly shocked by this development.

THE LONGSHOTS is a somewhat competent, somewhat likable, completely generic, fairly lazy football true story movie. Because there just aren’t enough of those available. If you love mediocrity I would recommend you pick it up at your local video store, but they might not have it anyway because it’s an exclusive to one particular chain. So fuck it, just see if any football movies are on cable tonight.

Ice Cube sports
This entry was posted on Tuesday, December 2nd, 2008 at 5:23 am and is filed under Drama, Reviews. You can follow any responses to this entry through the RSS 2.0 feed. You can skip to the end and leave a response. Pinging is currently not allowed.