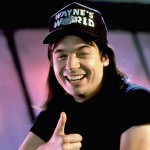 The plot of the first one was about Mr. Powers being frozen cryogenically because his archnemesis Dr. Evil was frozen and sent into space. And then they both get revived in the ’90s, and they have trouble catching up with the different changes. Also Mr. Powers has to pee really bad when he gets unfrozen, and that type of crap.

There are some good jokes in these movies and what makes them really work is the director Jay Roach really tries hard to capture the type of cartoony visuals of the movies these are a tribute to. So you got lots of nice lookin sets and devices and colorful costumes. And in the second one what they did to make it catch on, they copied one of the most brilliant ideas from the great underrated John Frankenheimer version of THE ISLAND OF DR. MOREAU, and had Dr. Evil have a midget lookalike as his sidekick. But then he thinks of him as a baby and starts ignoring his real son, even though the midget is some kind of freaked out monster that just says “eeeeeeek” all the time. The guy who plays “Mini-Me”, Verne Troyer, is not nearly as small as Nelson de la Rosa in Dr. Moreau but he gives a great acting performance as a creepy little bastard who can seem like a cute little kitty and then all the sudden try to bite your dick off.

Well by the time they got to this third one they’ve lost all interest in telling a coherent story. I mean this is the plot: Dr. Evil has a plan to team up with the Dutch master criminal known as Goldmember, but then Austin Powers captures him and brings him to the world court where he is imprisoned. But then Austin’s dad is kidnapped and Austin goes to Dr. Evil in prison to find out who it might’ve been that kidnapped his dad, and he says Goldmember. But Goldmember is hiding in the year 1975 using time travel. So Austin goes to 1975 and saves his dad and brings back his ex-girlfriend Foxxy Cleopatra who (if you do the math) must’ve been 12 when they were together. But then Dr. Evil escapes prison and teams up with Goldmember to try to flood the earth, but all Goldmember is good for is eating his own skin and painting people’s dicks gold. But Dr. Evil’s son Scott starts trying to be more evil so Mini-Me defects and helps Austin and Foxxy to come in and get Goldmember, or something. But then they all become friends.

So it’s more of a collection of skits than a comedic spy movie, like the first one or IN LIKE FLINT was. If you like this movie really depends on if you laugh at any of the individual jokes. Dr. Evil does not get as much to do although I liked how he reacted to the freakiness of Goldmember. Mini-Me has some good shit in there in my opinion, Michael Caine (ON DEADLY GROUND) is a good choice for Austin’s dad and Beyonce Knowles from MTV music videos is likable as a happy Foxy Brown type who calls everybody “suga”. Most of the best jokes are silly riffs on different movie conventions. You gotta admire a movie with a whole scene based on how you can’t read subtitles when there are white objects on the screen.

But the whole feel of the movie is kinda weird and forced. The extended celebrity cameo opening is amusing but plays like an opening to the MTV Movie Awards. Later there are scenes with improv between Dr. Evil and Goldmember and etc. and since these are played by the same guy it starts to get this weird pasted together feel like the “space ghost” talk show but without the same sense that the awkward timing is intentional. In fact even when it’s all different actors in the conversation, they are obviously using different takes sometimes to the point of incomprehensibility. They repeated the same scene from the second one that was a repeat from the first one, where Dr. Evil says something and his son says something back and then they start arguing and it is wacky. I have no clue what either of these jokers are saying though because it makes no god damn sense and it really isn’t funny unless your idea of funny is recreating the same thing you thought was funny five years ago, like when they repeat the same line in every Saturday Nite Live skit and everybody goes “Ha ha, I know that line! ‘Isn’t that special!’ Ha ha!”

And that is the whole problem with this comedian, Michael Meyers. Yes he is creative and talented but he gets into too much of a mathematical type formula with his humoring. All the characters have to have jokes that are reworkings of jokes they did before. The new character has to have a different nationality and accent, this time it’s supposed to be dutch instead of scottish or british. I think arguably this one has more new material than the second one but it is still too much of a greatest hits type of sequel.

I will say this though, there is alot of dancing. I don’t know why but it can be refreshing when people are just dancin all through their movies. DEATH TO THE SMOOCHY was pretty dumb but it had a couple gratuitous dance numbers in there that made it more enjoyable. This one has more. There are a couple of full fledged dance numbers and then there are several characters who do a little dance out of the blue for no reason. It is kind of infectious and actually before the movie was over a couple people in the theater got up and started dancing around. At first people tried to ignore them, then they started to laugh at them, then with them, then they started to join them one at a time. Before you know it everybody, even me, got up and started dancing together, all around the theater, over the chairs, down the halls and back. People were tossing their garbage around and into the garbage cans, passing around crumpled up popcorn buckets like a bucket brigade, working together to clean up the mess. The theater employees came in and started tap dancing, spinning their brooms and dustpans around, tipping the garbage cans sideways and spinning them around on their wheels. It was fuckin amazing. A genuine communal movie going experience.

Actually that is kind of exaggerated, what really happened was during the credits everybody got up and started to leave, even though obviously there was gonna be outtakes. Then the outtake started and they stood there confused, then some of them sat back down. Then the outtake ended so they started to leave again but then a different one came on. These fuckers can’t figure it out. Either stay for the credits, don’t stay for the credits, or learn to recognize the patterns of what types of movies will have shit during the credits. Or dance. Those are your choices assholes.

Beyonce Jay Roach Mike Meyers Seth Green
This entry was posted on Saturday, July 27th, 2002 at 11:01 am and is filed under Action, Comedy/Laffs, Reviews. You can follow any responses to this entry through the RSS 2.0 feed. You can leave a response, or trackback from your own site.

3 Responses to “Austin Powers in Goldmember”