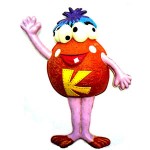 Anway this fucker inspired alot of the most famous horror pictures, from Psycho to Texas Chainsaw to Hannibal Lecter and, I forget which other ones, possibly The Fly or 20,000 Leagues Under the Sea or one of those. But this picture Deranged is a more obscure one from 1978 which is based much more closely on the actual case. 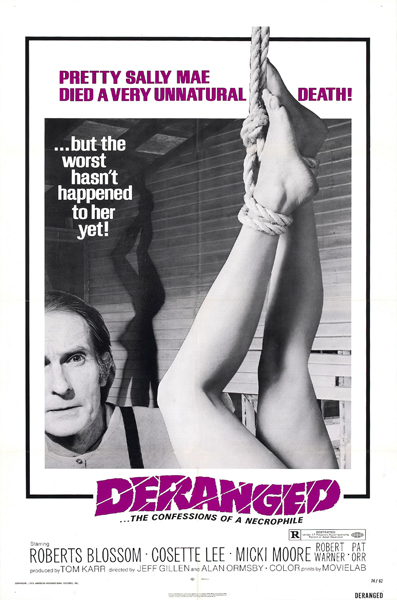 For the movie they changed his name to Ez instead of Ed, because he is still alive and living in some minimum security place somewhere and I mean, you never know. But personally I think he would be able to figure out that it was him if he saw the movie. Anyway the story begins with Ez’s mom dying, and shows how lonely he is, and next thing you know he digs her up and starts taking care of her. Then it’s more graverobbing. I don’t mean to preach or anything but the guy is a sicko in my opinion. Anyway there are subplots about Ez having dinner with his childhood buddy, who he calls sir. His buddy’s wife (“ma’am”) convinces him to start going on dates, and this leads to him start killing.

Now this whole graverobbing cannibal business is a really crazy story and that’s obviously the main appeal of this picture. But the only reason I enjoyed it is because, well, it’s funny as hell. I mean yes, there might be some people who would argue that it is tasteless to take some of the most shocking atrocities ever committed, put them on screen thirty years later and play it for laughs. But, in my opinion, there is, I mean, as far as I’m concerned, with the uh… well, they’re right. It’s tasteless. but still.

Ez is played completely convincingly by Roberts Blossoms as this dim old farm boy who is over polite and with no social skills. Which fits the character pretty good if you think about it. When a gal is trying to come on to him, he seems confused and says, “ma’am?” Later he tells his mummified dead mama that he thinks the gal has a screw or two loose.

There is another funny scene where Ez is driving home from having first dug up his mom’s corpse. He gets pulled over and he tells the cop that the bad smell in his truck is from a dead pig. As he drives away he says, “I apologize for calling you a pig, mama.”

And then when local gals are missing, Ez starts telling everybody that they’re not missing, he has them at his house. People just laugh and say that he has a twisted sense of humor. I thought this was pretty funny, then I read that it really happened with Ed Gein. So maybe it’s not funny, even though I laughed. I guess it depends on your tastes in real life serial killer comedy. I mean if you like them then, this must be one of the better ones.

Alan Ormsby Ed Gein true crime with the names changed but you know who I'm talking about
This entry was posted on Tuesday, January 1st, 2002 at 6:41 am and is filed under Crime, Horror, Reviews, Thriller. You can follow any responses to this entry through the RSS 2.0 feed. You can skip to the end and leave a response. Pinging is currently not allowed.

One Response to “Deranged”