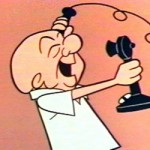 I’ve seen a couple of the old Zatoichi movies and I liked them, but I was excited for this one not because it was a Zatoichi film, but because it was a TAKESHI KITANO film. The great badass laureate does his usual writing/directing/editing deal while playing the blind masseuse with the deadly cane sword.

So I don’t know why but for some reason it threw me off that this really was more of a Kitano movie than what you expect when you see a Zatoichi movie. It’s like, what if Jim Jarmusch made a Zorro movie? It’s kind of weird. The character is very similar to how Shintaro played him, with a little more of the Beat Takeshi humor and for some reason with blond hair. But the feel of the movie itself is very Kitano. It wanders around like a dotted line in a Family Circus comic, gradually introducing a family of offbeat characters, without letting on too strong about which ones the movie is about. It has the usual Kitano sense of humanity, introducing a couple of dumb (one arguably retarded) characters and one crossdresser, without a trace of being judgmental.

Man, I felt dumb that I didn’t figure out that geisha was a man until Zatoichi pointed it out. The dude is blind and he figured it out before me. I feel your pain, Eddie Murphy. 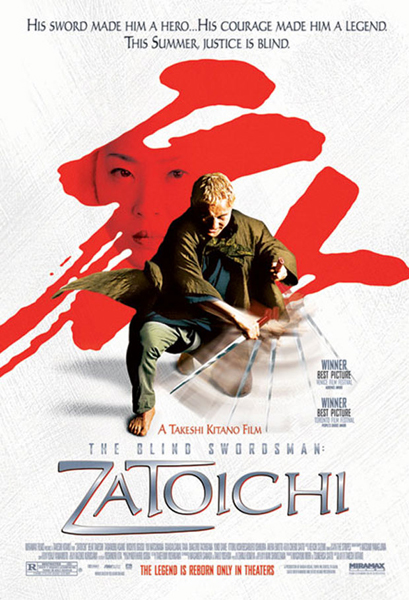 The weirdest thing is that alot of the movie really doesn’t focus on Zatoichi at all. It keeps flashing back to tell the stories of the other characters like the two geishas and the rival samurai bodyguard (all of them interesting). Early on, Zatoichi goes to gamble on dice, and I thought it was going to be that scene from the first Zatoichi where he pretends not to know his opponents can see the dice, tricks them into cheating and then scams them out of all their money. Instead, Zatoichi just gambles. And gambles. And he stays there for days. It’s partly my own fault, because it took me longer than it should have to figure out what he was really doing: bonding with one of the gamblers, the nephew of the nice old woman Zatoichi is staying with. But this portion of the story is so long it’s kind of weird. It seems like the first half of the movie every time they cut back to Zatoichi all he does is sit there and bet. You want him to be onscreen more and passive less. Even though when he’s offscreen you definitely get involved in the other characters.

I gotta be honest, while I appreciate this approach when I think about it, I had a hard time going along with it while I was sitting there in the theater. I just had trouble getting involved in the story for a while, and I would even go so far as to say I was bored. It wasn’t until late in the game, when the story started revealing itself as more of a traditional samurai type story (Zatoichi avenges the two geishas whose parents were murdered and frees the town from control by gangsters) that I got all the way into it. But I have a hunch it’s one of those movies where now that I got the plot over with, if I go back and watch it again I will like it alot better.

When it does turn into a straight ahead Zatoichi movie, that’s a little weird too. Takeshi Kitano is known for the violence in his movies, but he’s never been an action star. Now all the sudden there he is running around slaughtering people with a sword, and he’s really fucking good at it! On the other hand, all the gore is done with – man, I hate to even tell you this – they do it with computers. As far as I could tell, not a single robe was stained in the making of this picture. You got blood spraying all over the place and sometimes it works, because they make it squirt out in pretty spectacular ways that maybe would be hard to pull off with blood packets, I don’t know. But then you got all these stabbings and it just doesn’t really look right. Part of the problem is that the effects are not up to modern Hollywood standards of realism, but I think it’s just a bad idea from the beginning. Use computers to add detail, or for particular shots. But don’t do all your bloodshed digitally. It just doesn’t have the same effect that it had in the old samurai movies when you at least knew that the sword was a solid object and not just a bunch of 1s and 0s. There’s a pretty great slicing that worked okay, but I was almost offended by the flying severed arm. That would’ve looked so much more real if it was just a rubber arm. They have those in Japan, don’t they? I bet they do.

Maybe the most surprising and most successful aspect is the way Kitano turns it into an almost musical. At various times throughout the movie he zeros in on people working in the fields or chopping wood and shows how their actions turn into a beat. I think this is showing how important sound is to Zatoichi, how he hears things and notices patterns and what not. That’s how he knows how to kill these motherfuckers. At the end, the beat is infectious because it turns into a huge festival with fancy costumes and thunderous tap dancing. I almost feel like I dreamed this but there’s even a shot where the geishas morph back into their childhood selves before their parents were killed, and it made me think of the end of Return of the Jedi where everyone was celebrating, the Ewoks were enjoying the savory flavor of barbecued stormtrooper meat and a bunch of shimmery blue ghosts were there to enjoy the show. It was like that, but some guy in the shitter afterwards told me it was like Riverdance.

Anyway it’s weird moments like that that stick with you more than it’s the sword fights. When I think of this movie I won’t think of a badass blind swordsman, I will more likely think of the scene out of nowhere where the aunt starts laughing because Ichi has painted eyes on his eyelids. Or where the nephew says he’s going to teach three guys how to fight, then gets mad at them for “doing it wrong” when they fight better than him.

In other words, it’s a Beat Takeshi movie. Yeah, I’m gonna have to watch this one again.

samurai Takeshi Kitano
This entry was posted on Sunday, August 15th, 2004 at 4:22 pm and is filed under Action, Comedy/Laffs, Crime, Drama, Reviews. You can follow any responses to this entry through the RSS 2.0 feed. You can skip to the end and leave a response. Pinging is currently not allowed.