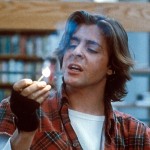 No. No no and no. They are gonna play Cabin By the Lake, because it’s a USA original picture. And that is two hours where they could have been playing a chuck norris movie or what have you. Maybe even van damme. So this IS important. you want this picture to be good because, let’s face it, these are the ones that count. 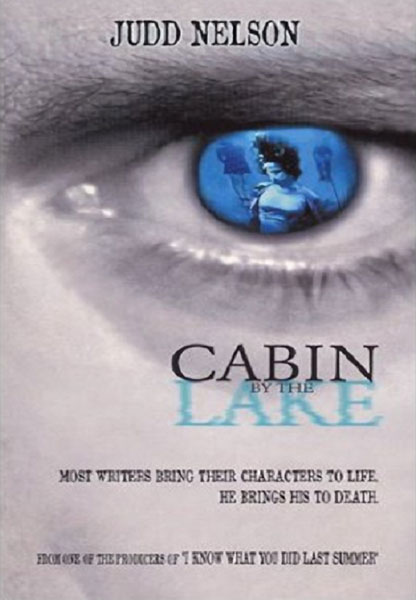 Well the picture does start out pretty good, with this Judd Nelson playing a screenwriter who’s on the phone with his agent, jumping all over his balls saying “where’s the script, why isn’t it finished, what are you doing.” And he says, “What am I doing? Well, I kidnapped a girl, I have her chained up so I can find out about her motivation, I can drown her if you want, ha ha ha.” And the nice thing is, he’s not joking. This ain’t foreshadowing, folks. He already has a secret soundproof room where he keeps his victims and then he chains them up and sinks them to the bottom of the lake and goes down there and plays dress up with them and calls it “tending my garden.” What he is in my opinion is some kind of sick fuck. But it’s nice that we don’t get some long boring setup about how this dude gets pushed to the edge of insanity and finally decides to begin kidnapping girls to improve his characterization. No, just cut straight to the nutball.

There is some black humor. Judd hangs out with his buddies and makes jokes about how his script is real “deep” and that kind of thing. They don’t get it though, you had to be there. But then the movie turns real serious. The first twist is that his last girl gets away only about 45 minutes in. And she wants more than anything to catch this guy, and also to face here fear of water and also to have sex with the deputy. So these special effects guys make a dummy of her with a camera in the eyeball and videotape Judd “gardening.” But then they don’t catch him and then he kidnaps the girl again and then she doesn’t know how to escape again and they still have to catch him.

There is alot of scenes where she’s locked up and tormented and staring at herself in a mirror. And this cop is trying to track down the killer. It is real serious, kind of reminds me of that show millennium that they show whenever I turn to FX.

But then suddenly in the last half hour, Judd’s agent and the director of his movie show up at his house, and they both do “funny” type overacting and the music is all “boop boop, funnyfunnyfunny, laughity laugh laugh funny.” I don’t really get the joke though in my opinion.

I also didn’t really buy the whole story. Like the cops didn’t do very good investigating. THey didn’t even look at the spot where the escaped girl crashed her car and was abducted, and worse than that, they didn’t watch the video they took of Judd returning to the bodies! Cops in my experience are never that dumb, believe me I wish they were. I mean I’ve never done serial killing and never will, but I would HOPE they have motherfuckers after the killers who are AT LEAST as bad as these fuckers who always bust you for property crimes and etc.

But what can you do man. The good thing about this movie is it does bring to light an important topic i think alot of people didn’t know about. I mean personally at least i had no idea this kind of thing was going on behind the scenes in hollywood, it is a real eye opener in my opinion. I sure HOPE the dude who wrote this was investigated in case it is semiautobiographical, as a Writer I know that many works are semiautobiographical in alot of cases.

Anyway I just want to say, speaking for myself only, that i think killing people for inspiration in your work is not right. As a Writer I would even go so far as to say it should be against the Writer’s code. Especially the way this dude did it, because it didn’t seem like he even really got anything from the killing. I mean, his script sucked anyway and he even said so himself. And I noticed he wrote it in past tense which judging from what I’ve read is not really proper screenwriting format. Anyway judd if you want inspiration go for one of these pretty young muses or what not, consensual only please, don’t kidnap somebody or kill them. You just LOOK at a pretty young gal is what your supposed to do for inspiration, or maybe go take a walk, go bowling, mow the lawn whatever, take your mind off it. The idea will come to you bud, I promise. What your doing, it’s just not cool man. I know that Writing is an Art and it is the most important part of my life, but even I know it’s not worth it. You have to draw the line somewhere and this is where I’m drawing it, pal. I don’t care how dedicated you are, drowning girls is NOT a legitimate writing technique.

Okay i’m gonna get down off my soap box now. Anyway the picture wasn’t too bad a way to spend two hours but, to be frankly honest, it wasn’t too good a way either.

Nobody was kidnapped in the Writing of this essay

Judd Nelson Po-Chih Leong TV movies
This entry was posted on Wednesday, February 2nd, 2000 at 5:55 pm and is filed under Horror, Reviews. You can follow any responses to this entry through the RSS 2.0 feed. You can skip to the end and leave a response. Pinging is currently not allowed.