Cort plays Alex West, a sanitarium buddy of Norman Bates. Alex got locked up at the age of 6 for killing his stepfather (kids do the darndest things), and had a great father-son relationship with Norman. Now not only is Alex free, but Norman has just died and willed the motel and house to Alex so he can make something of his life. Or peep on women and then kill them, I guess. Hopefully the first one. 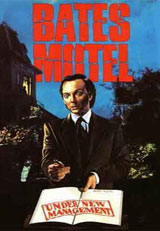 The premise is explained in a hokey black and white 1960 segment where Norman is glimpsed briefly, not played by Perkins but by a guy named Kurt Paul, who was the Norman stunt double in PSYCHO II-III. (He also played “Norman Baines” in a Halloween episode of KNIGHT RIDER.) There’s a scene where the executor of the will announces who gets what, and some guy who taught him how to cook gets a turkey. I can only assume this scene is supposed to be funny, but otherwise most of this doesn’t come across as a comedy exactly.

Cort looks about as boyish as he did in HAROLD AND MAUDE even though this is 16 years later. With his weird makeup and bug-eyed expressions I think they’re trying to make him look like Norman. What they don’t do is make him a psycho, at least not in this pilot movie. He might be crazy but he doesn’t get tempted to kill anybody. He sincerely wants to honor his friendship with Norman by getting the motel up and running again, even though he could make alot of money demolishing it and building condos according to the guy at the bank (Gregg JUST BEFORE DAWN Henry). It’s actually kind of cool and humanistic that this fella is trying to honor the memory of a guy who, let’s face it, made some pretty large mistakes in my opinion. Not to be judgmental, I’m just saying he stabbed some people to death, left some bodies in ice machines, etc. But Alex isn’t dwelling on that, he’s remembering Norman’s good points. For example he knew alot about birds, he kept the sheets clean, etc.

It’s the same Bates Motel and “Psycho House” set familiar from the other movies and the Universal Studios tour, but we’ve always only known it to be located 15 miles outside of Fairvale, CA, now all the sudden they tell us it’s in a town called Fairville. Also, Alex adds a little fountain in the courtyard to make it fancy.

Helping Alex to get the place running again are Lori Petty (POINT BREAK) as a teenage runaway he finds squatting in the Bates house and Moses Gunn (SHAFT) as a defiant carpenter who he finds in a standoff with police when he goes to hire him. Actually come to think of it his introductions to these two characters are the best parts of the movie because they’re genuinely weird. He first sees Petty as a silhouette in the dark and he freaks out. There’s a long, spooky shot of her covered in shadow, a dim line of light dancing around the edge of a weirdly wavering mane… it turns out for some god damn reason she’s walking around in the dark wearing a chicken costume. I would have to say that’s the highlight of the movie, it’s supposed to be funny I’m sure but it’s so strange it makes it effectively creepy.

Other than the part about Henry pulling a Scooby-Doo to try to get more money out of the property, which you can see a mile away, it’s hard to guess where this story is going. Alex keeps talking to Norman, but it doesn’t really seem like he literally thinks he’s having a conversation with him. Then his bulldozer crew discovers Mrs. Bates’s body (and her name is Gloria instead of Norma). And he starts hearing legends about Mr. Bates. I was wondering if Alex would end up with some mummified corpse or other staying in the house. Maybe Mother could get back in the rocking chair and introduce each episode Crypt Keeper style.

But just when it seems like it might start to get interesting, suddenly there’s a complete left turn. Kind of like how Marion Crane died and suddenly the movie was about Norman, this one suddenly starts to follow a woman who stays at the motel. She tries to commit suicide but suddenly discovers some kind of prom going on at the motel and has a romantic encounter with a teenage Jason Bateman. If I had been prepared for it to suddenly switch to a different story I guess it would’ve been okay, it has a pretty good ending. Anyway, this is where you realize that if BATES MOTEL had actually been a series it wouldn’t have been all about the motel management adventures of Alex West. It would’ve been a horror anthology deal where different (probly supernatural) stories would happen to guests of the motel. FRIDAY THE 13TH: THE SERIES also started in ’87, so I guess everybody was looking for ways to make anthology TV shows loosely tied to famous horror movie series. This might’ve been more like 1988’s FREDDY’S NIGHTMARES, which was a bunch of random dream related horror stories introduced by Freddy Krueger (only a central character in a few episodes, like the cheesy Krueger origin story pilot directed by Tobe Hooper). I wonder why they never tried a CHUCKY’S TOYBOX or a HALLOWEEN: THE YEAR-ROUND SERIES?

BATES MOTEL was written, directed and produced by Richard Rothstein. The only other things he directed were two episodes of THE HITCHHIKER, but he did go on to write UNIVERSAL SOLDIER. The movie’s TV production values are a poor replacement for the cinematic feel of the movies, especially when the music by action movie maestro J. Peter Robinson resorts to keyboard quirky circus music type shit. You’re gonna replace Bernard Herrman’s orchestra with some shit that could be in a comedy scene on Power Rangers? I don’t like that. Not inordinately.

This is by far the worst of the PSYCHO related movies, but that’s not a surprise. Apparently they tried to get Anthony Perkins to do it first, and he was right to be against it even if the part 4 he made later wasn’t so hot either. This one goes in the “interesting as a curiosity only” file.

Bud Cort Gregg Henry Lori Petty Moses Gunn TV movies
This entry was posted on Monday, November 9th, 2009 at 12:30 am and is filed under Horror, Reviews. You can follow any responses to this entry through the RSS 2.0 feed. You can skip to the end and leave a response. Pinging is currently not allowed.