The movie starts out with the song “One is the Loneliest Number” and maybe it’s just me but I don’t think it’s a coincidence that every one of the motherfuckers in this movie is lonely as hell. You got the divorced cop who drives around talking to himself about his job pretending he’s on COPS. You got the young coke snorting gal who sleeps with older dudes like myself and enstranges from her parents. You got her dad, the game show host dying of cancer; you got the TV brainiac kid that hates answering questions, the former brainiac that wants braces for god knows why, the old man on his deathbed, his emotionally unstable young wife, his nurse… I mean I could go on all day but you might as well just see the thing and make a list of all the characters yourself. I mean hell I know I’m Writing a review here but you can’t expect miracles out of me jesus. 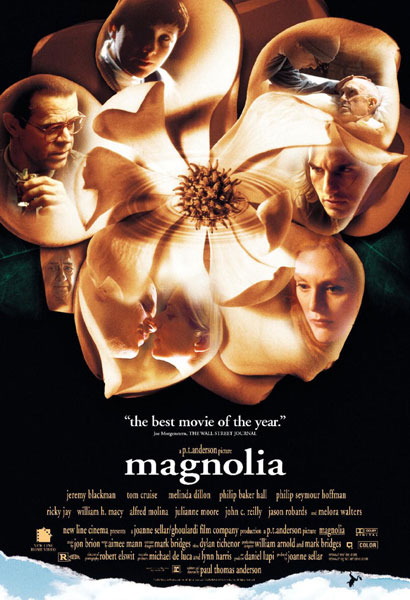 Like I said the dude making this movie knows his shit when it comes to the Art of Cinema. This is one of those intoxicating type filmmaking movies where you just get drunk off how great it all is. The casting is all perfect, even the minor characters like two guys that own a furniture store. You always feel like you’re seeing a scene you’ve never seen before, even if it’s something as typical as a pig interogating somebody or a lady picking up pills at the pharmacy. All of the acting is fucking spectacular and there’s a lot of good characters. Now I can’t believe I’m saying this but one of my favorites was this cop. I mean the guy’s an idiot, as well as a cop, but after a while you start to feel sorry for the dude. I mean he falls down in the mud and loses his gun and suddenly everyone on the force acts like he wet his pants or something.

You know come to think of it there IS a scene where a kid wets his pants. On live TV. And the other kids notice and start cussing at him. At the same time the host is just losing it because of cancer, talking gibberish, sweating like a pig, giving away the answers as he stares death in the face and then he falls on his ass. This scene is so damn sad even a hardened, hardcore motherfucker like myself might – MIGHT – theoretically start misting up in the eyes a little. And the thing that’s unusual about it is that it doesn’t even have anything to do with caring about the characters. It’s just that two unrelated, situations happening at the same time on the same show, on live TV, and the situations are SO damn pathetic they make a man cry no matter who it happens to.

And that’s just the beginning. This is a movie that starts out funny and gets sad real quick, and then stays sad for a couple hours straight. And when I say sad I mean SAD. I mean we got two people dying. We got three couples dealing with fucked up relationships, three people dealing with their parents being assholes, we got a murder, we got a drug problem, we got a couple of suicide attempts, we got all kinds of shit.

And there are real good scenes. There’s a funny one where the cop comes over to tell the cokehead to turn her music down. He’s attracted to her so he tries to think of any excuse to stay and chat. Meanwhile she’s shaking from withdrawal and dying to get rid of him. So they end up going out on a date. Even the funny scenes are sad. And remember you got like five or six different stories here and every single one of them is sad. There is not one story about a funny baker or a talking dog. Just sad and more sad.

Maybe the saddest story is about the old man dying who wants to see his son who hates him for abandoning him and whose young wife he doesn’t know loves him and regrets that she cheated on him and is just about at the breaking point. And then there’s the old man’s nurse who we only see on the job but we see how hard it must be on the brain to be a sensitive, Positive type dude whose whole job is to be there when a guy dies.

Yes, this story is sad and I think it’s also pretty unethical. Like many great Cinema Artists whoever the motherfucker is who made this movie has in my opinion violated human rights in his quest for perfectionistics. I mean I could be wrong but I’m pretty sure they took this poor old guy out of a nursing home somewheres and filmed what he did. In fact I’m surprised they cut out the parts where he begged them to let him go because that would have made the movie even sadder as impossible as that may seem. If I am wrong and this was actually just an actor then I apologize and I also would like to say that this motherfucker BETTER get a damn Oscar because he is VERY convincing. If I am right though and he is just a kidnapped invalid then hell give him an Oscar anyway for the ordeal he had to go through for these Hollywood pricks.

I mean maybe that’s your thing. Maybe you like to cry. I don’t know you, for all I know you LOVE to have your eyes all red and itchy, snot dripping down your face, headache for the rest of the night. You like to stare into the pathetic dirty bottom of the human soul. It’s your thing.

But late in the movie something happens, I mean I’m talking the most freaky ass twist I’ve seen in god knows how long, and the picture is saved. This is something I’ve never seen before but I’m sure glad I finally did. It lightens things up and it gives the characters a chance to go wait a minute dude, this is too much sadness, let’s have a little happiness and/or redemption here and there.

Well I don’t know how to end this review really but I’ve been working real hard this week so cut me some slack jack. the end.

Alfred Molina John C. Reilly Julianne Moore Paul Thomas Anderson Philip Baker Hall Philip Seymour Hoffman Tom Cruise William H. Macy
This entry was posted on Thursday, January 13th, 2000 at 8:37 am and is filed under Drama, Reviews. You can follow any responses to this entry through the RSS 2.0 feed. You can skip to the end and leave a response. Pinging is currently not allowed.