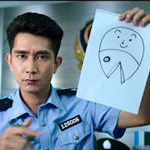 It’s directed and co-written by Stephen Chow, but he’s not in it as an actor and it’s not a martial arts movie. It is, however, full of his kinetic Looney Tunes style slapstick action. Hopefully the people who have a problem with wire tricks and digital FX assists already saw SHAOLIN SOCCER and KUNG FU HUSTLE and know to stay far away from Chow. This is a movie with a skateboarding mermaid, an out of control jetpack, a half man/half octopus who’s often hanging upside down or crawling around on the ceiling, a mermaid matriarch who splashes water into animated shapes to tell stories. And of course some cartoon violence, including poisoned sea urchin throwing stars. END_OF_DOCUMENT_TOKEN_TO_BE_REPLACED