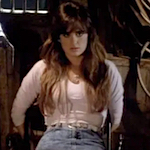 Then all the sudden the Perkins brothers are in prison together. Then all the sudden they’re out of prison together. At times the editing of this movie is incoherent, but there are other times when it’s got a good momentum to it. They stop to talk to some ranchers, cut to the ranchers already dead and the brothers wearing their clothes. Some of it works. END_OF_DOCUMENT_TOKEN_TO_BE_REPLACED