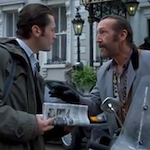 THE COMMITMENTS is the story of a wannabe music manager in Dublin convincing his friends (all white) to put together a soul cover band. The conceit is that ’60s soul music is beautiful and “honest,” that working class Dubliners have more in common than they realize with the African-Americans who created this music, and that the novelty of white Irish people pouring their hearts into these beloved songs would be a cute and fun way to celebrate them in the context of a comical underdog story.

This is one of Mrs. Vern’s favorite movies, so I wanted to be open to it, but I definitely rejected the idea at the time, not taking any serious offense or anything but just under the belief that at best white singers can do pretty good soul music. Dusty Springfield was a one off and Amy Winehouse was 9 years old at the time so it just seemed delusional. I imagined some kind of “let’s all clap for these white people pulling off pretty good soul music” story of triumph for people who don’t generally listen to the real thing. END_OF_DOCUMENT_TOKEN_TO_BE_REPLACED One of my favorite singers, Don Covay, has passed away at the age of 76. I expect many or most of you never heard of him, so I want to share a couple of his songs with you and I think you’ll love him too. He was a great solo artist, but was more successful as a songwriter for other people. His best known composition was probly “Chain of Fools,” performed by Aretha Franklin. Have Mercy! the Songs of Don Covay

is a whole compilation of songs he wrote, as performed by Wilson Pickett, Solomon Burke, Little Richard, Wanda Jackson, Ben E. King… I mean, he got around.

I buy alot of random funk and soul compilation CDs to try to discover things I wouldn’t know about otherwise, and it was on one called Breaks Sessions

that I first learned about Don Covay. It’s a nice 2-disc collection of songs that were sampled in hip hop, such as “Nautilus” by Bob James (sampled by Ghostface in “Daytona 500,” among many others) or “Tribute to Obabi” by The Last Poets (which you’d know as “Excursions” by A Tribe Called Quest). Some of the songs you find on these things are by more obscure artists than those guys, though, ones I never heard of, often without any other recordings to their name. Still, if I like the one song I look them up and in the case of Don Covay it turned out there was a motherlode of other great stuff. END_OF_DOCUMENT_TOKEN_TO_BE_REPLACED