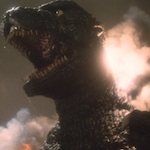 This one ignores all the previous sequels. There’s no Mothra, no Minya, no Monster Island, only the events of 1954’s GODZILLA: KING OF THE MONSTERS, so in that sense it’s less FORCE AWAKENS and more David Gordon Green’s HALLOWEEN. It was made for the 30th anniversary, so think about the films of 1990. In terms of time, if not cultural relevance, it’s like if this summer had a big new event sequel to TREMORS or DARKMAN, I guess? Or, to put it another way – GODZILLA 1985 is five years older today than the original GODZILLA was at the time. Shit. END_OF_DOCUMENT_TOKEN_TO_BE_REPLACED