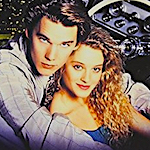 Tom is a shy recent high school graduate. Since he looks like Ethan Hawke they don’t try to pass him off as a total nerd – he wears a Los Lobos t-shirt and has posters of The Stranglers, The The, Elvis Costello, UB40, and that Lynda Barry “Poodle with a Mohawk” cartoon, all suggesting he’s, like, a guy who listens to college radio or whatever. But he doesn’t make it clear what other passions he may have, save for this “mystery girl” next door (I think she’s housesitting?) who he spies on through a telescope (unethical). He lives in the shadow of his brother Craig (Brian McNamara, SHORT CIRCUIT), who’s at law school, and his parents’ dog, who they’ve taken out of town for a dog show. END_OF_DOCUMENT_TOKEN_TO_BE_REPLACED Dan Stevens, who you know from playing the libidinous chandelier designer Lord Downington Abernathy on Downton Abbey, but who I know from playing the douchey soul-patched heroin trafficker in the other new movie I watched the day before this, plays a soldier called David Collins who shows up on Mrs. Peterson (Sheila Kelley)’s doorstep one day. He knew her son Caleb, who died in Afghanistan, says he promised to come check on the family for him and tell them he loved them right to the end. This brings up alot of emotions of course but she invites him in (like a fucking vampire) and he befriends her drinking, Henry-Winkler-esque husband Spencer (Leland Orser, SEVEN), her cool 20-year-old waitress daughter Anna (Maika Monroe) and her put-upon high school son Luke (Brendan Meyer, SPOOKY BUDDIES). So he ends up sticking around for a while. END_OF_DOCUMENT_TOKEN_TO_BE_REPLACED