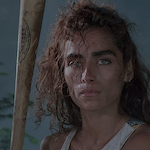 It’s written by men: story by Jim Makichuk (2 episodes of Highlander: The Series), screenplay by Craig Clyde & James Hennessy (CHINA O’BRIEN II) & George Saunders (BLOODSPORT 4: THE DARK KUMITE, BLACK ROSE). But it’s directed by a woman, Tanya Rosenberg, who has no other credits. According to an actor interview on the Vinegar Syndrome blu-ray she and the crew were Israeli, and that’s the complete sum of information I was able to find about her. In the tradition of the female directors making b-horror for Roger Corman, Rosenberg uses the same butt shots and locker room shower scenes as a dude would’ve, and puts them in underwear, crop tops or short shorts. But arguably her view of the sleazy, disgusting men who disrespect them is even more extreme than the industry standard. END_OF_DOCUMENT_TOKEN_TO_BE_REPLACED 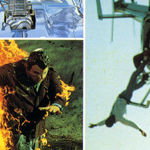 That’s the beginning, and it continues like that. That’s a movie you can call ACTION U.S.A. all right. I would also accept AMERICA T.N.T. or DYNAMITE EAGLE SQUAD. END_OF_DOCUMENT_TOKEN_TO_BE_REPLACED