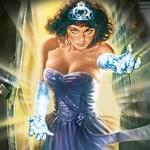 When PROM NIGHT came along in 1980 the modern age of horror had been just kind of kicking off. By ’87 it was an industry, it had a built-in audience that worshiped special effects artistry and loved franchises. So hey, PROM NIGHT was a big one. Time for another PROM NIGHT. Doesn’t even need Jamie Lee. She would’ve graduated by now. Who was the killer again? The brother? Well, that doesn’t work. Do a new one. Make her a prom queen. And put her name in the title. Maybe make it rhyme? END_OF_DOCUMENT_TOKEN_TO_BE_REPLACED