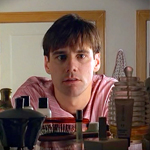 It sounds like a Twilight Zone premise, and it kind of is: there’s an episode of the ’80s incarnation of the show that’s pretty similar. In “Special Service,” written by J. Michael Straczynski (CHANGELING), David Naughton is shaving one morning when the bathroom mirror falls off the wall and he sees a camera behind it. A serviceman shows up and tries to make excuses but soon has to admit to him that his life is a popular TV show. He seems to be allowed to live in the regular world, though, and the people around him are just cool about keeping the secret until the cat’s out of the bag, at which point he gets mobbed by screaming women. He also got to grow up normal before they started doing this to him five years ago. END_OF_DOCUMENT_TOKEN_TO_BE_REPLACED