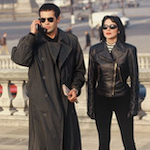 RUNNING DELILAH finds Christina (Cattrall) working as a secretary, but she’s actually Delilah, a spy trying to steal documents from her criminal boss (Yorgo Voyagis, VAMPIRE IN VENICE). She meets up with her partner Paul (Zane), who sports what was called a “Caesar cut,” as popularized by George Clooney on ER, and laments that they never got it on. He seems to take it well when she turns him down again, and this is actually one time when it’s a benefit that it was supposed to be a TV show. If it was a movie the guy she turns down would turn out to be a traitor, but since it’s a TV show it just means there will be sexual tension and then they’ll fall for each other. END_OF_DOCUMENT_TOKEN_TO_BE_REPLACED