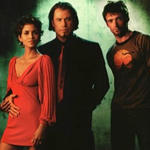 Though an ex-con, Stanley is 100% good guy. We find out, of course, that his big crime was a hacktivism/whistleblower type thing where he planted a virus in an intrusive FBI spying program. (In my opinion Julian Assange and Edward Snowden both fantasize about being Stanley Jobson and this movie is their SCARFACE.) He’s trying to be a good boy now, and is introduced wearing only a towel and hitting golf balls off of his trailer in an oil field in Midland, Texas. A mysterious stranger named Ginger (Berry) shows up knowing everything about him and sexily harasses him into flying to L.A. to meet her boss, Gabriel Shear (John Travolta, BROKEN ARROW). END_OF_DOCUMENT_TOKEN_TO_BE_REPLACED