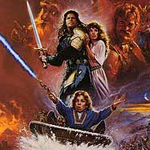 The first Daikini they find is Mad Martigan (Val Kilmer, BAD LIEUTENANT: PORT OF CALL NEW ORLEANS), a warrior imprisoned in a small cage who seems at first like a Jack Sparrowish rogue. When an army is headed their way and most of Willow’s party turns tail he has little choice but to free the man and convince him to help, like an action comedy set up. END_OF_DOCUMENT_TOKEN_TO_BE_REPLACED