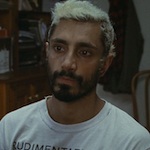 SOUND OF METAL is not what I pictured at all. It’s about this guy Ruben (Riz Ahmed, VENOM) who’s a heavy metal* drummer, and then he loses his hearing. That’s the part I did know. The poster and the trailer and everything all focus on him shirtless on stage banging away on those things, and especially since it was nominated for best picture I had to figure it was about him struggling and overcoming and finding some thrillingly dramatic way to keep playing. I’ve heard of deaf people who play music based on vibrations, so I don’t think it’s impossible. It’s loud music, after all.

That’s not what this is at all. In the beginning he’s on tour with his group Blackgammon, which is just him and bleached-eyebrow singer girlfriend Lou (Olivia Cooke, READY PLAYER ONE). They live in an RV (a little nicer than NOMADLAND) so they’ll just play a show at some small place, try to sell some records and merch, then move along to the next town and find the next place.

The hearing loss seems pretty out of the blue. His ears just start ringing before a show. Then it sounds like he’s underwater. He just kinda pretends it’s nothing and hopes it will pass. Doesn’t even tell Lou. During the show he just goes for it, and Lou is looking at him like something’s wrong, so we wonder how far off he is. Suddenly he loses it, gets up and runs out the fire exit. END_OF_DOCUMENT_TOKEN_TO_BE_REPLACED