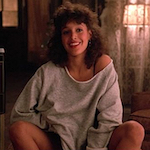 If all you care about is plot, FLASHDANCE isn’t very good. There’s not much to it, just two central threads, both lightly sketched. First is the story of a talented young dancer who wants to apply to a ballet academy, but believes that her modern style will be rejected by snobby gatekeepers. We’ve seen so many more detailed variations on that theme in BREAKIN’, STEP UP, CENTER STAGE, STREET DANCE, etc. that this doesn’t seem like much.

The second thread is a romance between her and her boss, who’s twice her age, is completely transparent that he’s interested in her because he saw her do a sexy dance, is not particularly hot himself, keeps hitting on her after she says no, pisses her off by secretly using his connections to get her an audition she wanted to earn, and is forgiven without ever doing anything to make amends. At best, you understand her having a fling she’ll regret later, and hope she broke it off within the week. It’s hardly a romance for the ages.

And yet I kinda loved FLASHDANCE, because it feels like every other thing besides the plot goes above and beyond. In the case of the cinematography it goes above and beyond and loops back under and then goes above again. It’s Donald Peterman, who had shot WHEN A STRANGER CALLS and a couple others. He later became Ron Howard’s guy (SPLASH, COCOON, GUNG HO, HOW THE GRINCH STOLE CHRISTMAS) and Barry Sonnenfeld’s guy (ADDAMS FAMILY VALUES, GET SHORTY, MEN IN BLACK) and he did STAR TREK IV: THE VOYAGE HOME. Okay, I’m not sure what to make any of that, but he also did POINT BREAK, and that’s an impressive credit. END_OF_DOCUMENT_TOKEN_TO_BE_REPLACED