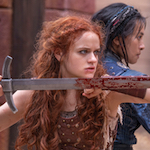 In flashbacks we learn that due to a lack of male heirs The King (Ed Stoppard, JUDY) was gonna let this motherfucker Julius (Dominic Cooper, WARCRAFT) marry the young princess. She almost went through with it “for the good of the kingdom” or whatever, but backed out at the last minute, and now this hostage situation is how Julius plans to change her mind. Great guy. END_OF_DOCUMENT_TOKEN_TO_BE_REPLACED