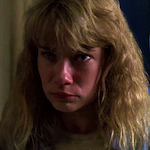 And it’s directed by John Carl Buechler (TROLL, CELLAR DWELLER), who’s an FX makeup legend (FROM BEYOND, DOLLS, GARBAGE PAIL KIDS THE MOVIE, NIGHTMARE ON ELM STREET 4, HALLOWEEN 4). But it doubles down on all the sins that started in part IV and got worse in V and VI. We’ve returned to part IV’s “two stories about two cabins next door to each other” format, with even more assholes in this sex cabin than ever before. And according to the late Buechler in many interviews before he died, the movie got completely screwed by the MPAA, who by this point saw this series as their arch-nemesis. They were forced to lose most of their gore, throwing off the rhythm of every important beat in the movie. It definitely seems that way – lots of killing, but either the camera doesn’t point at it or it cuts after a couple frames. And tragically the original footage was not preserved in such a way that there can ever be a restoration. Thanks alot, Movie Prude Asswipes of America. END_OF_DOCUMENT_TOKEN_TO_BE_REPLACED