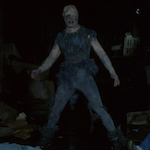 It’s a movie that’s crude in every meaning of the word, it’s in very poor taste, it also makes me laugh quite a bit, and it’s so dorky it feels kind of sweet and well-meaning, despite all kinds of ignorant jokes and requiring a “WARNING: THE TOXIC AVENGER CONTAINS SCENES OF EXTREME VIOLENCE” disclaimer at the beginning. Or maybe that’s all nostalgia because I loved this movie so much growing up, after me and my friends somehow managed to rent a copy while we were in middle school. (I seem to remember it being in an adults only section.) We’d never seen DEATH RACE 2000 and didn’t have driver’s licenses, so we thought the bad guys purposely running over people for “points” was one of the funniest things we’d ever seen. END_OF_DOCUMENT_TOKEN_TO_BE_REPLACED