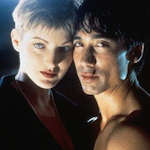 Set in the futuristic New America of 2019 A.D. (“After Dollman?”) it’s the story of kickboxing champion Chance O’Brien (Keith Cooke, CHINA O’BRIEN I & II) trying to keep doing his thing in a changing world. Combat sports are beginning to be dominated by new models of cyborgs, including those created by the sinister Sianon Corporation, who try to bait “the greatest human fighter in the world” into entering their imaginatively titled event “The Tournament.” END_OF_DOCUMENT_TOKEN_TO_BE_REPLACED