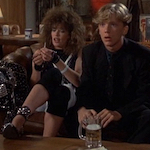 Much like EXPLORERS, we have two oft-bullied nerds, the main character Gary (Anthony Michael Hall, following SIX PACK, VACATION, SIXTEEN CANDLES and THE BREAKFAST CLUB) and computer genius best friend Wyatt (Ilan Mitchell-Smith, HOW TO BE A PERFECT PERSON IN JUST THREE DAYS, DANIEL, THE WILD LIFE). Going by the actors’ ages, Gary and Wyatt are about 2 or 3 years too old to be Explorers or Goonies. So they’re different in that they do not dream of adventure; they are entirely consumed by horniness. And the girls they like to stare at in school ignore them, so Gary’s big idea is to make a woman. He’s inspired by seeing BRIDE OF FRANKENSTEIN on TV (colorized! what the fuck!?) and figures his smart friend should be able to do something like that with his fancy computer machine. END_OF_DOCUMENT_TOKEN_TO_BE_REPLACED

star pinch hitter of a co-writer to carry his dead weight and turn this into something truly special. But that person must’ve been busy so he got Robert Klane, writer/director of the disco movie THANK GOD IT’S FRIDAY (1978). Klane had previously been a novelist, but in 1970 adapted his book WHERE’S POPPA? into a movie, which led to writing some episodes of M*A*S*H, an unproduced GREASE sequel called GREASIER, the Summer of 1985 movie that I skipped THE MAN WITH ONE RED SHOE, etc. END_OF_DOCUMENT_TOKEN_TO_BE_REPLACED