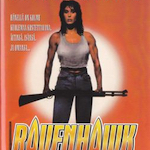 In the prologue, Senator Stansfield (John de Lancie, Days of Our Lives, Star Trek: The Next Generation) – who’s on the phone talking in an evil voice while a naked lady lounges by the fire nearby – pressures his stooge Thorne (William Atherton, DIE HARD) to finish “negotiations” with the tribal council to approve a land deal to build a nuclear power plant. (In a dark touch, he says if they don’t do it now the Department of Transportation will build a freeway there. Either way, the Natives are fucked.) END_OF_DOCUMENT_TOKEN_TO_BE_REPLACED