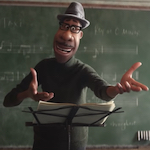 The protagonist, Joe Gardner (voiced by Jamie Foxx, and I honestly never thought of him as Jamie Foxx), is a New York City middle school music teacher. Not a bad one, but not currently seeming to motivate kids like he’s Mr. Holland or somebody. He’s finally been offered a full time job at the school, which impresses his mom (Phylicia Rashad, CREED) but sparks feelings of failure that his occasional gigs as a jazz pianist haven’t led anywhere and he might have to settle in doing this less exciting work. END_OF_DOCUMENT_TOKEN_TO_BE_REPLACED